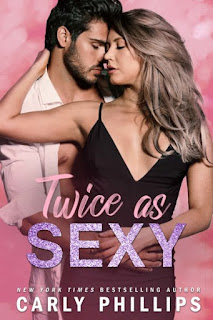 Twice as Sexy is the second book in Carly Phillips's Sexy series, and now we're on to the second member of the close-knit trio of best friends who are more like brothers, all of whom are thirty (or thereabouts) and co-owners of TEN29. Tanner Grayson is a man who has had to learn to control his temper and not allow his anger to get the better of him. He knows all too well what he could lose should he give in to the urge to react first and ask questions later. In the over ten years since he, Jason Dare, and Landon Bennet lost Landon's twin brother, Levi, to a hazing incident during their freshman year of college, Tanner has experienced the lowest of lows and the highest of highs, but it isn't until he meets Scarlett Davis on her thirtieth birthday that he feels something he's never felt before. It could be lust, but after their memorable night together, Tanner wants more. However, can he actually have that with the workaholic Scarlett when he finds out that she's an assistant district attorney. How could a woman like her ever want to have anything to do with a man like him. and will all his years of control break when his past returns?

This was quite a good read, one that had a hint of angst given the loss that both main characters experienced years prior--Tanner the loss of one of his closest friends, Levi, and Scarlett the loss of Hank, her younger brother. Other than that, this was a fairly lighthearted read, save for the bit of mystery suspense that came in the form of who was trying to hurt TEN29's business. Tanner and Scarlett had the whole insta-lust thing going from the moment they catch a glimpse of each other, but that aside, they certainly had a great deal of chemistry. Compared to the first book, the pacing of this second one was a wee bit slowed down, and I honestly think it worked out better, not feeling as if it was too rushed. I also liked that they had their respective support systems and that we did get a glimpse of their family backgrounds, allowing readers to have a better understanding of who they are and what the circumstances of their families were like when they were younger and at present. So, overall, Twice as Sexy was entertaining and was a strong, 4.5-starred follow-up to More than Sexy, but now I'm eager to read the third book! ♥