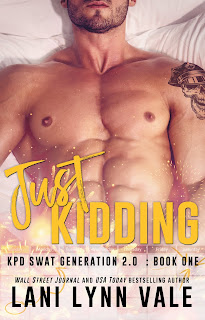 Lani Lynn Vale is starting off 2020 with her latest spin-off series, and I've been really eager to get my hands on this ever since I read the sneak peek--aka chapter one--in the KPD SWAT Box Set last month. Just Kidding is the first novel in Vale's new KPD SWAT Generation 2.0 series, and it's the story of Dax Tremaine and Rowen Roberts. Dax is the son of Max and Payton Tremaine (Another One Bites the Dust, book three in the Freebirds series), and Rowen is the daughter of Luke and Reese Roberts (Center Mass, book one in the Code 11- KPD SWAT series). You can pretty much go into this new series without having read any of Vale's previous series, although there's a certain kind of thrill when you're familiar with recurring couples and characters because you feel as if you know them already. Full disclosure: I read Center Mass but not Another One Bites the Dust yet was still able to enjoy the new series starter.

Dax Tremaine and Rowen Roberts grew up with their parents belonging to the same extended circle of friends, but it wasn't until Rowen showed up at her father's office--the same father who just happened to be the Kilgore's chief of police--with a head as smooth as a baby's bottom. She relays her suspicions as to who put hair removal product in her conditioner and all because of some guy that Rowen had a longtime crush on. When her father asks Dax to take his younger daughter home, Rowen ends up having a front-row seat to Dax's photo shoot as Mr. January for the police department's charity calendar. Soon, it's as if fate has no qualms having their paths cross time and again. Rowen's pretty sure Dax is only around because he pities her, but pity is far from what he's feeling towards Rowen.

First things first: The latter part of the blurb for this book did not take place; either that or I'd completely missed it. Rowen getting held up at gunpoint never played out and was only mentioned by her to her dad, Luke. Dax wasn't even during the whole gun-pointing incident! And this wasn't the first time that a blurb for one of the author's books does this. It's weird, but yeah, back to the book itself... Dax and Rowen were easily likable and the slow burn romance allowed these two to get to know each other better rather than have the usual insta-alpha claiming. The villains in the story were, well, the sort that really had no redeeming factor to them, what with being motivated by misplaced jealousy, envy, and vengeance. I was just happy they'd gotten caught when they did. Overall, Lani Lynn Vale's Just Kidding was a four-star rom-com-suspense read and has me super excited to read the rest of the series! ♥