Review: The Guy on the Left by Kate Stewart (The Underdogs #2) 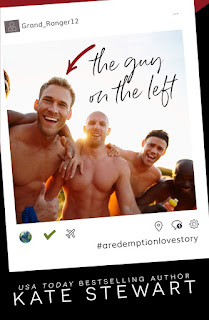 “I keep coming back here because this is where I want to be. I don't want to be anywhere else. But I'm not the man for you.”


The Guy on the Right grabbed hold of my heart; The Guy in the Middle (or what "little" was in the Team Player 2 anthology, but it was enough to make eager to get my greedy hands on it) took a piece of my heart; and The Guy on the Left broke my heart and then stitched up back together again. From the moment that Kate Stewart introduced readers to Troy Jenner in the Underdogs series starter, I knew I wanted more from him. I needed him to redeem himself for what he did to Theo Houseman and Laney Cox. I wanted to know his story and why he was the way that he was. And oh my word, but did this amazing author with magical goddess-like storytelling powers deliver! Gah! Would it be fair to have two novels penned by Kate Stewart on my list of best reads for 2019? Maybe, maybe not, but I mean, come on! How the heck could I not have these two Underdogs books on my freaking list?!

At eighteen, Troy Jenner's life changed in ways he never considered possible. He never thought one memorable moment which was sparked by one little lie could have the impact that it did, and not just on his life but that of the woman he's never unforgotten...and that of their son. Yes, he made it seem like he was a teacher like her, and no, she had no idea that he was a student--not hers, though--and was five years younger than her. Once she learned the truth, she demanded he stay away from her and their child. Now twenty-three, Troy wants his chance to show Clarissa Arden that he's not the boy she pegged him to be. He wants to be the father that four-year-old Dante Oliver Arden deserves. Troy is no longer the boy that screwed; he's the man that's ready to finally claim his family.

Le sigh. This book was just...everything. Seriously, it was as if my heart was working overtime. I felt for both Troy and Clarissa. The history between them wasn't exactly the sort that would give you warm fuzzies, and Troy definitely had his work cut out for him. Did they give each other a harder time than they should have? Yes, but if we're being totally honest here, wouldn't we do the same had we been in their shoes? Trust, like respect, needs to be earned, especially when it's already been broken before. These two had walls but there was a vulnerability to them--a fragility to their already fractured hearts that they were afraid of risking because they knew all too well that the other person had the power to shatter what was left of them. Kate Stewart did such a phenomenal job weaving Troy's story, so much so that whatever I thought was perfection has been superseded by the example that is this book. I'm highly recommending you check out The Guy on the Left, which grabs five-plus stars times infinity. ♥

Read my reviews for the Underdogs series:

Purchase The Guy on the Left on Amazon.