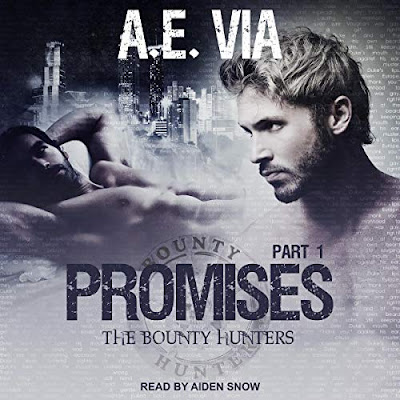 About Promises: Part 1
Duke Morgan owns and operates one of the largest bail bond companies in Atlanta. Not only does he bond criminals out of jail, he and his notorious group of bounty hunters will also track them down and ensure they show up for court.

Roman "Quick" Webb is Duke's business partner and best friend. Both men are in their forties and have given up on the happily ever after with the ranch-style home, and white picket fence. They'd both tried it and failed miserably. But they have their friendship and they have the business.

When Quick's son, Vaughan Webb returns—after seven years—from studying abroad with his law degree in hand, he's back to claim what he's always wanted...his fathers' best friend...Duke Morgan. Vaughan has always claimed to be a classic gentleman with an old soul. He was focused and dedicated to becoming the man worthy of Duke's love.

It's a complex and messy situation as Duke and Quick figure out how to still be best friends when one of them is sleeping with his friend's one and only son. But when Duke is hurt on the job, all the unimportant trivialities fall to the wayside and Vaughan and Quick put their heads together to save Duke.

About A.E. Via
A.E. Via has been a best-selling author in the beautiful gay romance genre for five years now, but she’s no stranger to MM. She’s been an avid reader of gay lit for over fifteen years before she picked up her laptop to place her own kiss on this genre. She’s also the founder and owner of Via Star Wings Books, having published a couple great new up and coming MM authors.

A.E. has a Bachelor of Arts in Criminal Justice from Virginia Wesleyan College that she used to start her own paralegal firm after she graduated in 2008. She spent five years preparing and filing bankruptcy petitions for struggling blue collar workers who couldn’t afford to file with a lawyer. It was a rewarding and satisfying career… but another path called to her. Writing.

A.E.’s writing embodies everything from hopelessly romantic to adventure, to scandalous. Her stories often include intriguing edges and twists that take readers to new, thought-provoking depths.

Now that she’s gotten over her 10 books published hump, she’s kind of known now for her hardcore, play rough and love hard, bad boy, alphas. However, she does like to push herself to step out of her comfort zone, exploring different tropes, but she won’t push herself into a whole other genre. She’s head over heels for gay romance and she has tons of more hot stories to tell.

Be sure to visit Adrienne on her social media pages and subscribe to her newsletter to never miss another release date! Go to A.E. Via’s official website for more detailed information on how to contact her, follow her, or a sneak peak at upcoming work, free reads, VSWB submissions, and where she’ll appear next.