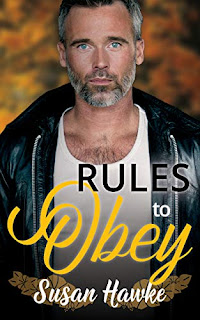 Gah! I can't believe this is the second to the last book in the Davey's Rules series! It's difficult not to be addicted to this series, which is the second from Susan Hawke after her fantastically amazing Heartstrong series, what with its lighthearted stories with a punch of angst of finding love while honoring each couple's love of the Daddy-boy kink. Rules to Obey is the latest release, and it's the story of twenty-two-year-old Jeffrey Robustelli, a server with a genius IQ at the exclusive Daddy's Lap club, and Marcus Alves, a furniture designer twenty years Jeff's senior who specializes in creating things for littles. While this book can standalone well enough, because there is an incident that happens between Jeff and a former member of the club in the first book that is resolved in this new book plus there is a handing off of something from Marcus to Jeff during a painful time in Jeff's life (as well as for everyone  else in the club) in the second book that is explained more fully here--plus the fact that we have a recurring cast of characters and the series is pretty awesome--that I'm going to recommend that these five books be read in order.

When Marcus Alves wins a date with Jeff Robustelli during a charity auction, he didn't think it would take as long as it did for them to actually push through with it. Jeff, on the other hand, was hoping that Marcus had just forgotten about it completely. But Marcus has high hopes that Jeff is the little that he's been hoping for--the boy that he could finally call his own if given a chance. He knows Jeff is hesitant and wary, and Marcus is half-afraid that Jeff will change his mind. When Jeff's past comes swooping back in full force, he's forced to confront two painful parts of it. The last thing he expects is for Marcus to offer himself up to not only help get free of the shackles that still have him tied to some degree to his hateful father and the cult Jeff was saved him from by his uncles, but also to ease his mind over what happened to him in Daddy's Lap some time ago. Maybe this is only temporary, and maybe this is just supposed to be pretend, but if obeying the demands of their hearts is breaking the rules, then so be it.

Okay, confession time: I wasn't a big fan of Marcus's in the second book, Rules to Break. He just came off as some cocky Daddy who didn't even have a boy of his own, so who was he to enter into some wager concerning a boy who wanted a Daddy? So yeah, I was a wee bit apprehensive going into this new book because of him, HOWEVER, the man won me over within the first chapter. His heart was always in the right place when it came to Jeff, and he was never pushy nor a jerk about stepping in and going into Daddy mode. Then there was Jeff, who truly did evolve into a far more mature and confident young man in this book. He had already been through so much in his short life, yet he finally came to the point wherein he would take steps to embrace the boy that he was and to move forward. I loved these two together! Five stars for Rules to Obey. Time to see if Davey ends up with who I think it is. ♥

Purchase Rules to Obey on Amazon.