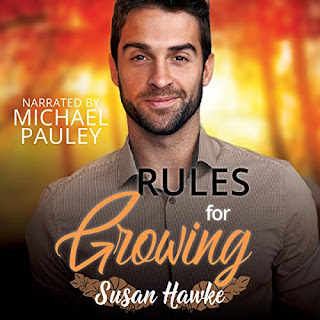 Rules for Growing was released as a freebie eBook by Susan Hawke, and as always, I loved reading this newest addition to the Davey's Rules series. The audiobook is once again narrated by the always awesome Michael Pauley, and this duo of Hawke and Pauley truly are one of my favorite things about listening to audio this year. This is also the first M/M/M story in the series, so it certainly had me curious as to how the narrator was going to handle three main characters instead of the usual, not that I was worried because obviously, Pauley has managed rather well with two main characters plus a slew of entertaining supporting characters.

Dr. Landon Prescott and his little, Mikey (aka Michael and whose last name I can't recall being mentioned throughout the series, but if it has, then let's just call this a blip in my brain), want for nothing in their relationship. They're happy and in love and are more than content with their life. When Mikey has an accident that lands him in the ER of the hospital where Landon is scheduled at, he meets Dr. Chris Kowalski, the resident in charge of his case. As promising as his career may be, Chris clearly needs a firm hand to help him find balance in his life. Who would have thought he would find exactly that in a Daddy and his little wanting a pup of their own?

I wonder if I'm ever going to come across an audiobook penned by Susan Hawke and voiced by Michael Pauley that I'm not going to love--and heck, I hope I never do!--because this latest one is yet another winner. Landon and Michael have always had such a wonderful relationship as evidenced whenever they make an appearance in the series, so bringing Chris into it could have tipped the scales one way or the other. I liked how these three struck a balance and this being the first book I've come across where there was a Daddy, a little, and a pup earns it bonus points for originality and fantastic execution. Not surprisingly, Rules for Growing gets five stars. ♥