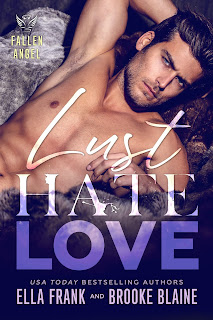 Lust. Hate. Love is the fourth novel--but fifth release--in the Fallen Angel series from the bestselling writing duo of Ella Frank and Brooke Blaine. The minute this beauty landed in my tablet, I couldn't click my Kindle app fast enough, and for good reason. The bit of a tease Frank and Blaine left readers with at the end of Angel, the third novel in the series, had me eager to find out how things would play out between Fallen Angel's bassist and the band's new manager. So naturally, after an eight-month wait, give or take a few days plus with a lovely bit of a short story in An Affair in Paris in July that served as a treat for fans and readers, the arrival of Killian Michaels and Levi Walker's happily-ever-after was the perfect Christmas present for those like me on Santa Claus's naughty list.

Killian Michaels knew they'd made the right choice to hire Levi Walker as their new manager. The man was going to help steer Fallen Angel in the right direction, and the sky's the limit for their band. Now, if only Killian could steer Levi in his direction and convince him that they'd make, as cheesy as it sounds, more than beautiful music together. But Levi knows how guys like Killian are. Been there, done that, and didn't bother getting the t-shirt. However, Levi is finding it difficult to thwart Killian's advances, especially when it becomes clear that there's more to the bassist than meets the eye. Crossing the line would be a mistake...or the best thing to ever happen to them.

I couldn't have chosen a better way to close out the Fallen Angel series. Not only do we get Killian and Levi's story, but Viper and Halo's as well as Jagger, Slade, and Imogen's stories are wrapped up rather nicely. Hooray for fabulous epilogues! But this book is more than its epilogue because Killian and Levi had the whole delicious push and pull going that made for a whole buffet of sexual tension between them. The added complication of Killian being the band's leader and Levi their manager isn't one that easily dismissed or downplayed. I loved getting to know Levi, but more especially Killian considering how vital he was in pushing Viper in the right direction when it came to his own relationship struggles with Halo early on. While Lust. Hate. Love is a five-starred story that may be read as a standalone, I suggest you read the series in order for the sake of the best possible reading experience. ♥

Read my reviews for the Fallen Angel series:

An Affair in Paris (short story) - five stars - My Review