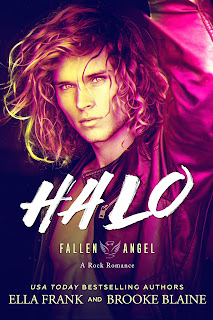 What do you get when you bring together the writing duo of Ella Frank and Brooke Blaine and a rock band in limbo? Well, you get their brand-new series, Fallen Angel, which has its opening act via Halo, released a day early. If you've read Blaine's A Little Bit Like Desire--released in July of last year and the second novel in her on-going South Haven series--then TBD and its members, including its potential replacement for the lead singer that went AWOL shouldn't be all that new to you. You don't necessarily need to read A Little Bit Like Desire but do yourselves a favor and read it anyway; heck, read the book before that, A Little Bit Like Love, as well because this series is a personal favorite of mine. But yeah, for all intents and purposes, you can go into Frank and Blaine's Fallen Angel series without having picked up Blaine's South Haven novels and still read a kickass romance.

TBD was on top of the world--that is, until their lead singer walked away from them. Six months on and countless auditions later, the four remaining members--lead guitarist Viper, bassist Killian, keyboardist Jagger, and drummer Slade--have yet to find a replacement for Trent Knox. Then Killian informs them he may have found exactly that after watching a video audition of a twenty-three-year-old named Halo. Viper isn't too sure if this kid who happens to be a decade younger than him is going to fare, but once Halo steps in front of a mic and strums his guitar, it's almost like being given an unexpected miracle by the music gods. However, Viper's already wary since being attracted to the band's new lead singer may cause problems sooner or later even if Halo is straight. But chemistry like theirs is something the band needs, and who knows? Maybe another miracle will happen and this particular gorgeous angel who could very well be a musical prodigy may just end up falling for the temptation that is Viper...

I love Ella Frank's stories, and I love Brooke Blaine's stories, but there's something special that happens when these two get together and pen a new romance--whether M/F or M/M--for readers to fall hopelessly in love with. Halo is straight and Viper is gay, but before you peg this couple as a rock star incarnation of Logan Mitchell and Tate Morrison from Frank's Temptation series, think again. Halo and Viper have their own story to share with M/M romance-loving readers like me, and other than the whole sexuality thing and Viper being unabashedly flirtatious and Halo's curiosity being sparked, these two guys are most definitely NOT Logan and Tate. The direction that the authors took the story itself was a surprise and a much appreciated one at that. Naturally, I'm not going to tell you what happens, but allow me to note that this does NOT end in a traditional cliffhanger. Instead we get a sort of happy-for-now ending, but the next two books in this series are about the same couple, with the rest of the band saved for afterward, I'm hoping. If the rest of the series is as fab as Halo, we're in for a rockin' good time. Five stars! ♥