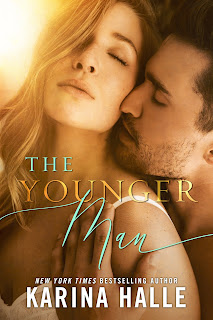 A romance about an older woman and a younger man who also happen to work under the same organization? Yes, please! Karina Halle's latest standalone romance, The Younger Man, is set in Madrid, Spain, which is where forty-year-old divorcée Thalia Blackwood moves to after a very messy divorce that was far more public than it needed to be. Leaving Manchester behind and starting over and coming on as the new sports therapist for Real Madrid was an opportunity of a lifetime. Getting along with the rest of the team would be a good thing, but she never expected to form such a strong connection with one of the players. To make matters worse, Alejo Albarado was twenty-three, making him seventeen years her junior, and he happened to be tabloid fodder. He was gorgeous and charming and one hell of a footballer. He's also been known to have his pick of women wherever he goes. The last thing Thalia needs is this kind of temptation in her life, especially when she can almost predict what would happen if they do indulge in their feelings. Theirs is heartbreak waiting to happen. Will Thalia survive it this time around?

It's been mentioned that the main characters from one of the author's previous releases makes an appearance here, but since I've never read Love, in English and I was still able to fully enjoy this new book, it's safe to say that you don't necessarily need to read the other book, although it's been on my to-be-read list for a couple of years so maybe it's time to check it out. Back to The Younger Man, which I'm happy to report was exactly what I'd hoped it would be. Thalia's and Alejo's respective back stories were both heartrending and it's certainly shaped them into the people they are today. I understood Thalia's hesitation to pursue anything outside the bounds of a professional relationship with Alejo, but it was clear that the bond they shared was something that demanded to be given a chance to flourish. However deep their involvement was, there were always going to be challenges, and goodness, but how I was rooting for these two. If anyone deserved to finally have their own slice of heaven, it was these two. Karina Halle made sure The Younger Man was a book that was worth the wait, and I loved every bit of it. Five stars. ♥

Purchase The Younger Man on Amazon.