Review: A Down & Dirty Christmas by Lili Valente 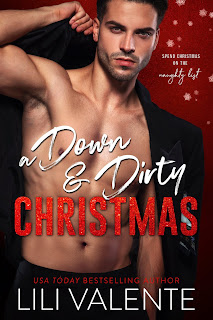 Snowbound with the Billionaire is a second-chance story about reporter Dakota Fleming and hotelier Garrett Lawler the Third. He was her Master and she was his submissive, and they were engaged to be married until distrust broke them apart. Four years later, they end up stuck in the new hotel he's building in her hometown due to a snowstorm. These two had some angst going on and for good reason, but it never drags the story down, especially with its theme of redemption and moving forward. This was definitely my favorite read in this collection.

Snowed In with the Boss is an office romance about executive assistant Jane Singleton and her billionaire boss, Tennyson. (I think Tennyson is his last name, so I have no clue what his first name is.) Ten knows she's off-limits, but all it takes is one blizzard that has them staying together past office hours. Ten and Jane have had a thing for each other for nearly the entire time they've worked together, so realizing that they share a need for domination and submission, respectively, also allows the two to be more forthcoming with their long-kept feelings for one another.

The last story is Masquerade with the Master, and it's also a story about second chances. Edward Mulligan knows letting go of Ivy Prescott was the right thing to do six years ago. Enough time has passed and now, Ivy isn't as naive as she once was, and she more than ready to finally be fully claimed by the only man who will be her Master--Edward. I liked that Ivy held her own and made it known that she wasn't wholly ready for what Edward was hoping for. This is my second favorite story in A Down & Dirty Christmas, which I'm giving an average rating of four stars to. ♥

Purchase A Down & Dirty Dirty Christmas on Amazon.