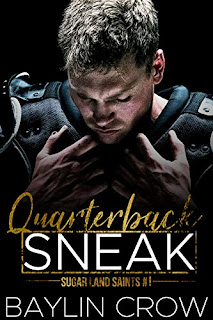 Baylin Crow is a new-to-me author and her first three books in her Sugar Land Saints series were my introduction to her. I'm saying "first three books" because I'm hoping--EXPECTING!--more from this college football romance world that she's created, at the very least one more book (but I REALLY want more than one!). I read the three books in one sitting. Yep, color me addicted, although if I'm being perfectly honest, the first book was more of a "meh" then a "wow," whether that be as a standalone or as a series starter. Thankfully, I decided to push forward because I already had the two other books on-hand, and I try to never DNF (did not finish), and I'm glad that I did.

Quarterback Sneak is the first Sugar Land Saints book, and it's a friends-to-lovers story that's a really quick read, turning out to be the shortest among the currently available books. We meet Rush Jaggers and Torin Hopkins as high school seniors. The two have been best friends for years, each one nursing a secret crush on the other. Their first kiss, however, turns out to be their only kiss after Rush discovers a life-changing secret about his family. Four years later and the two remain best friends and are a nearly unbeatable team on the field. But after all this time, Rush wonders if his ties to Torin are beginning to fray, especially since it seems that the man he loves is now done.

Because I read all three books in one sitting, I can't help but compare them, and unfortunately, book one falls short. Yes, Rush and Torin share a connection, but it's honestly one that's firmly founded on friendship alone. I could barely feel the chemistry between them, and whatever tension there was certainly wasn't sexual. I also couldn't fully grasp why everything had been put on hold for four years without either one of them choosing to discuss what happened. These two lived together in the same house! Argh! The flow of the story also felt somewhat choppy at times. While not terrible, Quarterback Sneak faltered and fell short, so I'm giving it 2.5 stars. ♥