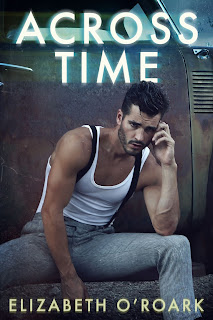 Elizabeth O'Roark's new series is a spin-off of her Parallel duet but can be read independently of each other (but yeah, do yourselves a favor and read it anyway!). Across Time is the first novel in the series by the same title and it tells the story of Amelie Besson, a twenty-one-year-old living in New York in 1987. Dreams from her late sister have Amelie putting her life in the present on hold to return to pre-war France. It's 1938 and the rumblings of a German invasion and an impending war serve as the backdrop as Amelie goes on a quest to find a young woman named Marie and offer her the help she needs. As if things aren't complicated enough, Amelie faces resistance in the form of Henri Durand, Marie's infuriatingly arrogant yet intoxicatingly gorgeous brother. With so much uncertainty swirling around them, Amelie and Henri forge a kinship that belies the deeper connection between them, but will that connection be enough to see them through everything they're about to confront? Choices will inevitably need to be made because when all has been said and done, the sad truth is that time waits for no one...not even love.

My introduction to Elizabeth O'Roark's writing came by way of her Parallel duology--Parallel and Intersect--a few months back, and while I've yet to go through her back list, when I found out that she had a spin-off in the works, there was simply no way I was going to let the opportunity to read and review pass. Fair warning: This book ends in a cliffhanger AND the second book isn't going to be released until April 1st of next year. Yep, that's four months, but based on O'Roark's track record with her previous duet, it'll be worth the wait (knock on wood!). There was so much to savor in this first book, that even though I'm no exactly known for my patience and I knew that there was a cliffy, I'm glad I went with my gut and read the first part of Amelie and Henri's story. I loved that they had to work through their issues before they were able to truly trust one another because it meant that they were building towards something more substantial. This story and the characters have me absolutely intrigued and on tenterhooks as to what awaits them in the next book. Across Time gets five stars. Let the waiting game commence! ♥

Purchase Across Time on Amazon.