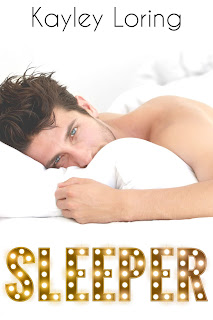 While Back for More was my first ever Kayley Loring story, it was an audiobook--and one of my favorites for 2019--so that makes her latest standalone release my first ever read from her, and what an adorably wonderful read it was! Sleeper is a falling-for-your-best-friend's-sibling romance, or conversely, it could be a falling-for-your-sibling's-best-friend romance. Whichever way you may choose to see it, this is the story of Shane Miller and Willa Todd and told from both their points-of-view. Shane is twenty-eight and a single father to five-year-old fraternal twins, Summer and Lucky. He's a former teen star turned successful actor best known for his rom-coms. Oh, and he's an insomniac who desperately needs sleep...and a nanny for his daughter and son. That's where Willa comes in. She's twenty-four and has recently returned from Paris to live with her older brother, Nico, in Los Angeles in hopes of getting her Etsy store up and running while working on a line of original scents. When Nico suggests to his best friend, Shane, that he offer up the nanny position to Willa, it looks like a win-win for everyone concerned. Willa has a job and Shane has a nanny. So what if she used to have a mad pre-teen crush on him and he's now got a hankering for her?

Okay, I've clearly been missing out because I was smitten while listening to Back for More, and now, I'm back for more and fell in love with Sleeper. I think I need more of Kayley Loring's writing in my life! I adored every single bit of Shane and Willa's story. These main characters were sweet and silly and completely dorky but they had the whole hot sexual tension going and when they finally got together, hello, sexy times! The banter was strong with these two and I loved their moments together, but when they were joined by Shane's kids, Summer and Lucky, they just felt like this family that was meant to be. I have absolutely no complaints about this book, and I'm holding out hope we get Nico's happily-ever-after too because he's a great brother and best friend. Five stars go to Sleeper. ♥