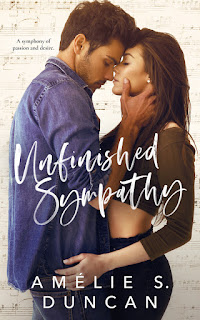 Amélie S. Duncan is a new-to-me author, so Unfinished Sympathy served as my introduction to her writing as well as being the first in her Absolution series. This is the story of a classical violinist turned audio engineer named Aubrey Irving and a classical pianist turned music producer and composer named Paul Crane. Their paths cross when they team up to work on a soundtrack for an upcoming video game developed by the company Aubrey works for. As much as they seem like the perfect duo to work on the project, the mutual attraction between them is palpable enough to be considered tempting and distracting. They know that becoming personally involved with each other could prove disastrous, especially given their respective pasts that they still contend with. She had to put her dreams on hold when her father passed away, forcing her to become the breadwinner, and he's had trust issues, constantly wondering if someone's with him simply because of his money. Will Aubrey and Paul give themselves and their feelings a shot to make beautiful music together or will their symphony remain unfinished?

This was a good read, one that happily met my quota for angst. Yeah, weird, I know, but if you're familiar with my reviews, you'll know that I have a thing for angst--not the kind that's thrown in for the sake of creating drama, but the sort that's important to the story. Thankfully, Amélie S. Duncan offered up the latter rather than former with her Absolution series starter. Duncan's writing as a whole is the best thing about the book, and I simply allowed her to tell me this story that was at times heartbreaking but ultimately became a tale of love that encourages and triumphs. My heart went out to Aubrey, whose life spiraled in a direction she never saw coming after she lost her father, but her growth from the moment she's introduced on the page to who she becomes by the end was inspiring. I liked Paul, as well, who needed someone like Aubrey in his life--someone to help him re-calibrate and find the courage to follow a path that he's always wanted to. Unfinished Sympathy proved to be a strong starting point for this new series and has me excited for what awaits readers going forward. I'm handing this one four stars. ♥