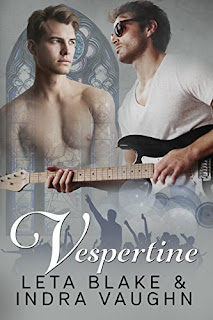 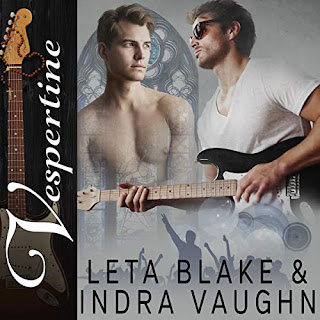 Note: The audiobook was provided by the authors via IndiGo Marketing & Design. The eBook is a personally owned copy.

Fingers crossed I can find words sufficient enough to explain why Vespertine gets the five-plus stars I felt that it deserved. I've listened to all of Leta Blake's currently available audiobooks, and while I have read Indra Vaughn's Patchwork Paradise, I've yet to listen to its audio version, so this one counts as my first from her, even if it is co-written. And...drum roll, please...it's narrated by none other than Michael Ferraiuolo, one of the most gifted voice-over talents out there, and clearly one of two of Blake's go-to narrators (the other being John Solo).

The story itself is considered a controversial one, what with one of the main characters being a Catholic priest. You'd think that being Catholic would have me shying away from books like Vespertine, but to be honest, I'm drawn to them, particularly when they're written by authors that I love or when the blurb sounds original enough to pique my interest. I want to see how the faith is presented and how the main characters find their way to each other. Suffice it to say, Leta Blake and Indra Vaughn have given me what I would consider the most original take on this particular story line. Now, I've had the eBook for a few years now, but it wasn't until I had the audiobook that I decided to do a read-along while listening to the audio, and goodness, but how this turned out to be one of the best dual experiences I've ever had.

Jasper Hendricks and Nicholas Blumfeld were friends who fell in love but went their separate ways. Jasper went on to become an ordained priest in the Catholic faith and Nicky launched a career as a rock star with his band, Vespertine. I loved how even when they grew up and turned into Father Jazz and Nico Blue, they were still Jasper and Nicky at their very core. As teenagers, a life together was not meant to be. Ironically, as adults seventeen years later, it was when everything was far more complicated that the possibility of having a future was far more palpable. I loved how this story was told, both in terms of Blake and Vaughn's writing and Ferraiuolo's narration. This was angsty and heavy, yet tempered by bites of wit and more lighthearted blips. Dare I say that Vespertine was Blake, Vaughn, AND Ferraiuolo at their best. Five-plus stars for this highly recommended audiobook. ♥