Book Spotlight: Bad for Me by Shanora Williams 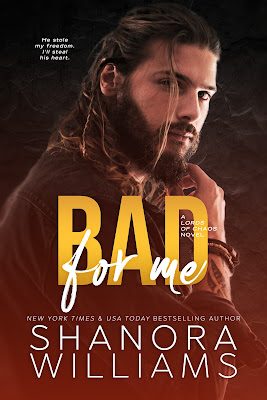 About Bad for Me
There’s a myth that floats around in my city.

They say the president of the local biker gang is ruthless, heartless, and that once you cross him, you’ll spend the rest of your life looking over your shoulder.

There are whispers that he was once lost in a forest, and when he was found, he was surrounded by a pack of wolves that were protecting him.

Many will tell you he’d never let his guard down for a woman, and that if he ever did, it would be bad for her.

The one thing this city doesn’t know about me is that I’m not your average woman. I’m a fighter, and when someone messes with my family, I will fight, and when my freedom is stolen, I will do whatever it takes to get it back.

When I’m done with him, the rumors will come to an end because I’ll be the woman who tamed this infamous biker president.

I’ll be the woman who, in the end, was bad for him. 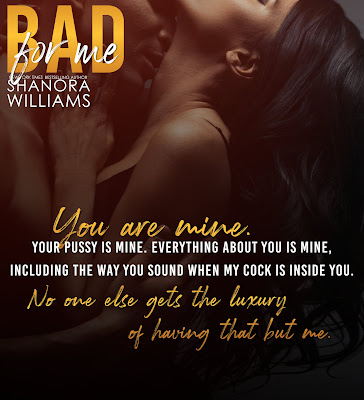 Read my five-starred review of Bad for Me.

Add Bad for Me on Goodreads. 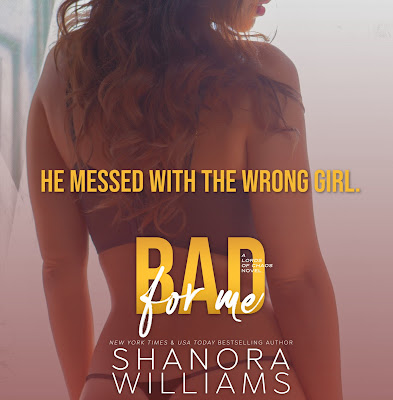 An Excerpt from Bad for Me
I shove my fears aside and take another step forward until I’m standing right between his long legs. He raises his chin.

Fuck it. If he kills me for this, then I guess I’m just a dead woman, but at least I’ll know I didn’t go down without trying.

I grip his shoulders and climb on top of his lap, completely naked. Pressing my breasts to his chest, I let my fingers run past his silky, wavy hair to curl a hand around the nape of his neck.

His serious expression doesn’t change. I can’t tell if he’s enjoying this or hating it. I wonder if he can feel my heart beating—feel how terrified and thrilled I am to be doing this. God, what is wrong with me?

I press on his neck with my hand, straddling his lap as I study his full lips. If I’m going to do this, I can’t hold back anymore. I need to prove to him that I’m worthy of being claimed.

So, I lower my face and kiss him. He stiffens in the chair, finally reacting, but I don’t ease up. I use my other hand to caress his shoulders and his upper back, all while kissing him with so much fervor and passion that it nearly cuts me in two. In two, because a part of me hates everything about this, while another part of me—one that I am absolutely disgusted with—is enjoying the hell out of it.

My tongue plunges through his full lips. His mouth tastes like fruit and I sigh devouring the crisp taste. Apple. It’s apple. Without thinking, I grab one of his hands and bring it up, forcing him to palm my ass. A deep groan fills his throat and he clutches me tight.

I fight a smile.

“There he is,” I purr. This is the side of him I’ve been looking for. The primal, hungry side of him that can’t resist the perfect seduction.

I break the kiss, refusing to give him too much affection. Right now, this is about our bodies and how much he’ll need mine by the time this is over.

I climb off his lap and watch his fiery eyes as I lower down to my knees. Perched between his thighs, I drag my palms over the tops of them, and then run a palm over his bulging erection. 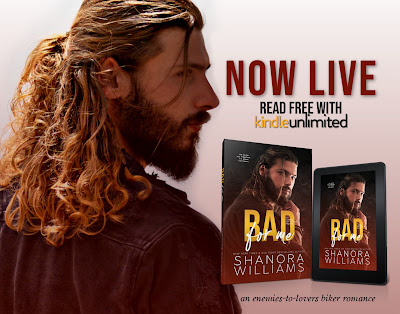 About Shanora Williams
Shanora Williams is a New York Times and USA Today bestselling author who loves writing about flawed heroes and resilient heroines. She is a believer that love outweighs all, but doesn't have a problem making her characters fight for their happily ever after.

She currently lives in Charlotte, North Carolina and is the mother of two amazing boys, has a fiercely devoted and supportive husband, and is a sister to eleven.

When she isn't writing, she's spending time with her family, binge reading, or running marathons on Netflix while scarfing down chocolate chip cookies.