Review: Extra Time by Charlie Novak (Off the Pitch #2) 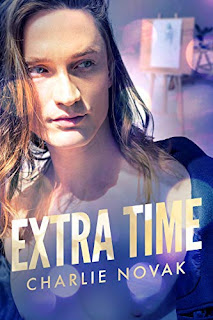 Charlie Novak has taken things up a notch with the second novel in her Off the Pitch series! Extra Time is the story of Kit Macken and Hugo Serin, the former being David Cade's artist best friend and the latter Christian King's football teammate in the series starter, Breakaway. Kit is twenty-five and knows what he considers his eccentricity is more of a deterrent in finding someone to share his life with. He's not delusional; he knows no one would want to be with someone like him. And then happenstance comes along and Kit meets Hugo, a footballer who's pushing thirty and is currently recovering from an injury and a divorce from his now-ex-wife. There's something about Kit that breaks through the bleakness that had been surrounding Hugo for far longer than necessary. They embark on an unlikely but much appreciated friendship, and when Kit is forced out of his house due to flooding, Hugo offers him a place to stay. Hugo's attraction to Kit is one that he's inspired to explore, but Kit's convinced himself that he isn't the type that's worthy of love. Can Hugo show Kit that they deserve a chance at love and happiness together?

There was a lot to love about this book. Kit and Hugo had that much needed chemistry that made them believable as a couple and with such strong back stories mixed in, becoming emotionally invested in their happily-ever-after was a no-brainer on my end. I so appreciated how the author tackled Kit's demisexuality and Hugo's pansexuality, making them part and parcel of the main characters without overdoing it and making the main characters' sexualities a bigger deal than they had to be. Hugo and Kit's story was this delicious slow-burn romance that was every bit as endearing as it was enticing. A definite bonus was seeing where David and Christian are in their own relationship as was David's love and protectiveness towards his best friend and former roomie. I'm giving Extra Time 4.5 stars, and I can't wait to read the third Off the Pitch book in what's now becoming a truly delightful series. ♥

Read my reviews for the Off the Pitch series: