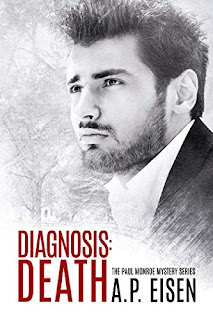 The first book in the Paul Monroe Mystery series most certainly hooked me and it continues to reel me in courtesy of the second novel. Penned by A.P. Eisen, Diagnosis: Death finds Thornwood Park police detective Paul Monroe and hotel manager Cliff Baxter three or so months into their new relationship. Paul remains in the closet, although the door may be more ajar than shut closed and locked off since his partner and his partner's wife already know that he's gay. He is trying, though, to show Cliff how much he means to him and that this relationship of theirs matters. Getting called to the murder of a renowned doctor highlights just how much harder Paul needs at making time for Cliff, especially when one phone call stirs up long-held hurts for the man he's assuredly falling in love with.

One of my favorite things about a series like Paul Monroe Mysteries is that readers follow one couple and that allows us to see how much their relationship has developed, especially when they encounter new challenges, both professionally and personally. While Paul and Cliff may already be three months into their relationship here in book two, that's still relatively new, and it may sound weird, but I actually liked seeing them trying to find their footing. The phone call that Cliff receives (yeah, I'm not saying what the call is about because, hello, spoiler!) does effect both of them, although Cliff more than Paul, and their relationship. Now, as far as the murder that Paul is investigating is concerned, well, I pretty much guessed who the murderer was very soon after they appeared on page. That didn't mean, however, that the story got boring or that I'd lost interest. As a matter of fact, I wanted to see how Paul and his partner, Rob, would solve the murder and what would happen to the villain. Of course, there was all the stuff going on with Cliff and Paul's relationship. My diagnosis? Diagnosis: Death was a five-starred read. ♥

Read my reviews for the Paul Monroe Mysteries series: