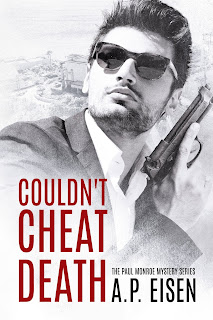 Couldn't Cheat Death is a well-written romantic suspense read and the debut release from A.P. Eisen. This being the first in the author's Paul Monroe Mysteries, readers are introduced to main character Paul Monroe, a Detective with the Thornwood Park Police Department nicknamed "Bulldog" for his tenacity and focus when it comes to his cases. What everyone doesn't know is that Paul happens to be gay and he's as deeply buried in the closet as he is deeply buried with his work. When the murder of a bartender and trainer is called in, Paul and his partner are tasked to figure out who could have killed the victim who had a reputation for sleeping around with both men and women. He meets the manager of the Starrywood Hotel where the victim worked and has no idea who Cliff Baxter. It's a belated realization that Cliff was best friends with Harley, Paul's late younger brother. Gone is the scrawny kid he barely remembers, and in his place stood undeniably gorgeous and put-together man. While the interest is mutual, Cliff promised himself he'd never get involved with another closeted gay man. Been there, done that, and has got the twice-broken heart to prove it. Reconnecting with the guy he had a crush on years ago and spending time together has Cliff rethinking if maybe he can make an exception for Paul, but will the killer get to them first?

I love romantic suspense reads in general, but it's the M/M romantic suspense stories that are my absolute favorite. Maybe it's all the tension--sexual and otherwise--between the characters and throughout the story that really resonate with me, and when a book is particularly well-written enough to not just capture but hold my attention from start to finish, then I consider that a heck of a win. I was more than impressed with A.P. Eisen's first foray, what with an intriguing crime for main character Paul Monroe to solve and an equally captivating brewing romance between him and Cliff Baxter, his late brother's best friend and four years his junior. I appreciated that while the attraction was felt on both ends, it was subtle and took some time before either one became wholly comfortable to fully explore it. Eisen did a fantastic job with the mystery part of the book, with a number of supporting characters who could very well have been the killer. The person who did turn out to be the killer was my lone suspect, but even though I did figure out the whodunit portion, I still wanted to see how it would all be revealed and that shows how engaging the story was. With the crime solved, the romance ends on a hopeful and happy-for-now note; I look forward to reading more from the series and author. 4.5 stars for Couldn't Cheat Death. ♥