Review: Asking for a Friend by Lauren Blakely (Boyfriend Material #1) 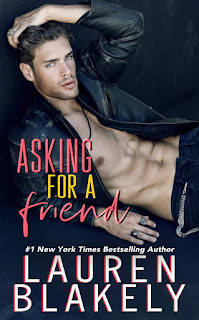 Asking for a Friend: Your Dax Powers icon is adorable.

Asking for a Friend: Why are you cringing?

Ping-Pong Lover: Isn't “adorable” the kiss of death for a guy? Like, “He's as adorable as a baby duck”?

Asking for a Friend: First, who wouldn't want to be compared to a duck? Second, if you're as adorable as a baby duck, count yourself lucky. Third, “adorable” has many meanings. You might think it only means “cute,” but maybe I'm using it synonymously with “appealing,” “delectable,” “dishy," or “dreamy”.

Ping-Pong-Lover: Do you actually know those synonymous off the top of your head, or did you google them?

Lauren Blakely is a prolific author, so choosing even a handful of top favorites among her books that I've read is never an easy feat; yet, I have no qualms whatsoever naming her newest romantic comedy masterpiece as one of her absolute best to date! Asking for a Friend is the first novel in Blakely's Boyfriend Material series, and while this can be read as a standalone, fans and readers of her more recent work will be tickled over the cameo appearances of past characters we've fallen in love with. If you happen to be new to all things Lauren Blakely, get to rectifying that on your list of New Year's resolutions, except start two weeks early by reading this fabulously wonderful book!

Asking for a Friend is the story of Amy Summers and Linc Silvers. She's twenty-eight and a junior editor with Bailey & Brooks Publishing in New York, and he's thirty and the new senior editor from California at the publishing house. After less than stellar experiences in the dating and relationship departments, Amy is resolute on keeping her eye on the prize, i.e. a much-coveted promotion, even though she's really drawn to her Clark Kent lookalike co-worker, while Linc refuses to make the same mistake of falling for someone at work, which is why he can't act on his attraction to the beautiful, cake-loving woman he works with. But sometimes, what's meant to be is meant to be...with maybe a bit of help from happenstance and fate. Oh, and an online dating profile that belongs to a friend.

Would it be too much to say that I loved everything about this book? Because I did, I really, really, REALLY did! Amy and Linc were adorable, and their conversations had that sort of witty banter that I consider a must in the rom-coms I read. With this particular sub-genre, you know that things are going to be lighthearted and that a happily-ever-after is pretty much a given, and Lauren Blakely gives readers all that and then some. Her writing is on-point, refusing to to throw in any unnecessary drama-rama and keeping the conflict short and resolved in a way that surprised me in the best way possible. The peeks at past couples was a definite treat, and the hints at the next couple in the series have me super curious, to the point that I'm wishing it were January already so we get Sex and Other Shiny Objects. Now, stop reading this review, and start reading Asking for a Friend, which gets five-plus stars. ♥