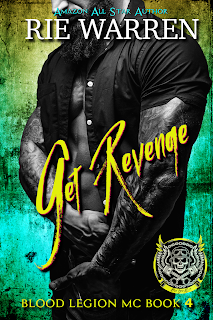 Rie Warren closes out her Blood Legion MC quartet strongly with a second-chance romance with every bit of grit and punch that I've come expect from this series. He may be better known by his road name of Revenge, but to Arden LeFevre, the guy who once owned her heart will always be Gabriel Arsenault to her. It's been five years since they went their separate ways, with Gabriel ensuring that there would be no way that Arden would even consider wanting him again. They were only twenty-one back then and very much in love. Arden believed she would spend the rest of her life with Gabriel. She thought wrong. Now, she's done the one thing Gabriel never considered possible after what he did--she's come looking for him. She desperately needs his help to escape the vile man that she's married to--a man who so happens to be Gabriel's sworn enemy--and save herself and her daughter, Aimee.

I hate saying goodbye to a book series that I've fallen in love with, but Rie Warren has written a series ender that's bound to leave fans and readers of the Blood Legion MC series more than satisfied. I loved that explosive chemistry that Gabriel and Arden shared. Even with the heaviness of the past and how things ended between them, it was clear that the love was still very much in existence. There's one particular twist in the book that wasn't all that surprising when it was revealed--which was pretty early on, thank goodness, because no one likes dragged out revelations--but Warren did it in a way that she still has her reader's full attention even though you know what's about to happen. The rest of the guys and their ol' ladies are present and accounted for, and this book turned out to be the perfect send-off for each couple and the club as a whole. Get Revenge was an intoxicating five-star read. ♥

Get Revenge (book four) - five stars - My Review (posted above)

Purchase Get Revenge on Amazon.