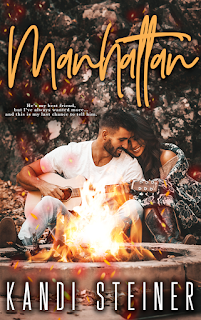 Ah, these Becker boys! I've been eagerly awaiting the youngest Becker's story from the moment he dropped the bombshell that he did in the second book, and now, here we are! Manhattan is the third and latest novel in Kandi Steiner's Becker Brothers quartet. Eighteen-year-old Michael Becker has just graduated from high school and while celebrating with his family and loved ones, he makes an announcement: He's moving to Manhattan. He's lost his passion for the distillery that should be his family's legacy but another family has lain claim over. He's lost his desire to be in Stratford. Everyone is shocked, but it's his closest friend whose world is on the verge of shattering.

Kylie Nelson is caught unaware by her best friend's decision. Is Mikey being rash or has he thought about this and simply never told her? Could it be because of his ex-girlfriend abandoning their plans and their hometown--and Mikey himself? Now, Kylie's pressed for time to show him what he'll be missing if he pushes through with his plans to head to New York. All she needs is one summer to prove to him that there's no place like Stratford, Tennessee--that there's no place like their hometown. And maybe she'll also finally find the courage to show Mikey how she truly feels about him. That she's always been his, that her heart only belongs to him. Will one summer be enough?

This has more of a mature young adult feel to it compared to the first two novels, but then that's to be expected considering the main characters are only eighteen and fresh out of high school. The cover of the book, though, has them looking older than they are, with the first two books having younger looking cover models. Yes, the cover is gorgeous, and I know we're told not to judge a book by its cover, but the fact is, many people do exactly that. Ooh, hot cover! Score! To be honest, the cover models on the first and second books, On the Rocks and Neat, which are about two of the three older brothers of Michael, look younger than the for Manhattan. But hey, it's a pretty cover.

As far as the story itself is concerned, well, there was so much about it I loved. These were two young people who were at the beginning stages of adulthood. Kylie and Michael may have made certain decisions already, but they still needed a great deal of life experience as well. Michael was oblivious to Kylie's not-so-platonic feelings for him, and even though he reciprocated said feelings later on, he inevitably fumbles. It's Kylie who wins as my favorite character here. I loved her spirit and her conviction. She made sense and loved herself enough to stand up for what she knew she deserved. Special mention goes to Betty Collins, super spunky senior! 4.5 stars for Manhattan. ♥


Read my reviews for the Becker Brothers series: