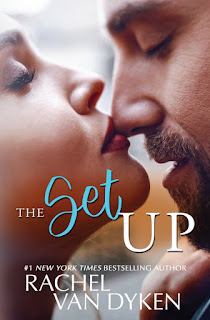 “I don't see this ending well, Finn. I see you getting bored. I see you moving on. I see you wanting more than I can give you. You're a Pleasure Pony, for shit's sake, you're not meant for a girl like me. I see you—”

“That's the problem, Jillian. You say you see me. But you really don't. And in that case, you're right, we would never work. Because I see you. But you don't see me.”


If I could have chosen the way the Bro Code series would close, this--THIS!--would have been it! Rachel Van Dyken did NOT disappoint with the story of the last Pleasure Pony standing. The Setup was funnier than I expected--and not just because of The Bet series's Nadine Titus's presence being even more pronounced this time around--but the sprinkling of angst gave this a perfect balance, making for an equally entertaining and endearing romance read, which was exactly what I needed. Finneas Titus finally gets his own happily-ever-after, but the path he has before him isn't quite an easy one. Rest assured he gets there with a little help from his friends...and an aunt with the most unconventional (yet undeniably successful) matchmaking methods that may or may not include a Chihuahua.

Finn Titus has earned his degree and is now taking his rightful place alongside his three best friends and the two men who started it all with Wingmen Inc. On his very first day, he's quickly assigned to test the company's latest dating app alongside the office manager, Jillian Hillstone. He needs to give this a hands-on approach--the app testing, not Jillian. Well, not that he wouldn't mind taking the hands-on approach with his gorgeous yet quite uptight co-worker, even though she doesn't seem to be as taken by him as he is with her. Maybe that's because he couldn't remember that they'd actually been in classes together while she was getting her master's, even if he did steal her unicorn pencil. Or could it be that she can't risk giving in to any attraction she has for him, mutual or otherwise, not when she has more at stake than he does? Either way, Finn's ready to go all in for the first time ever.

Ah, Finn... Seriously, this particular Pleasure Pony's back story took me by surprise, but in a truly good way, making him the sort of main character that I wanted to get to know more about. He had his work cut out for him when it came to Jillian, but goodness, these two had the sort of chemistry that needed to be explored, no matter how much one of them--cough, Jillian, cough--tried to deny it. There is a pinch of angst, but it worked really well in the story, which was, for the most part, a laugh fest. I expected nothing less, what with the original Wingmen and all four Pleasure Ponies PLUS Aunt Nadine present and accounted for. Rachel Van Dyken has five-plus-starred winner with The Setup, and while I'm sad that this series is coming to an end, Dyken gave her readers stories to remember. ♥

The Setup (book four) - five-plus stars - My Review (posted above)

Purchase The Setup on Amazon.