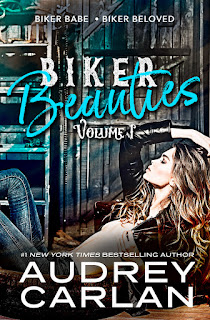 Biker Beauties: Volume 1 contains the first two in Audrey Carlan's Biker Beauties series, Biker Babe and Biker Beloved. The series is a collection of novellas about the women who fall in love with members of the Hero's Pride motorcycle club. I read the first novella, Biker Babe, early last month, and it proved to be an entertaining read. The second novella, Biker Beloved, strangely enough releases on the same day as this first volume, and the option to review was for the volume and not just the second novella. I jumped straight for the second book since I'd already read the first one, but for the purposes of this review, I'm going to give a quick summary of my thoughts in the review I already have up for book one. If you'd like to read the comprehensive version, feel free to peruse it here.

Biker Babe is the story of Shay O'Connell, the twenty-five-year-old Shay O'Connell and thirty-year-old Taggart "T-Rex" Crawford. She's the daughter of Hero's Pride MC's president--which makes her the club's sole bike princess--and he's the club's new VP. Considering who they are within the club, Shay doesn't think anything can happen between them, but Rex wants one thing and one thing only: to make Shay his ol' lady. As I mentioned in my review for this book, Shay and Rex had more of a "meet-heat" than a "meet-cute" given how the lust vibes were on full display from the get-go. I loved how Shay was brimming with confidence and knew who she was, not needing the validation from anyone. Rex's devotion to her was sweet with a heavy dose of alpha biker male. This gets 4.5 stars.

Biker Beloved is the second book, and it's about Shay's twin brother, Shane O'Connell, aka "Whip", and Anya Marakova. Shane is twenty-six and dad to five-year-old Shayna. After learning of his daughter's existence, what with her being abandoned by her junkie mother to Shane's parents, Shane leaves the military to be with Shayna and becomes a bar owner. He meets twenty-three-year-old Anya when she turns out to be Shayna's ballet teacher. They're immediately attracted to each other, but Anya doesn't quite know how to handle someone like Shane. As was the case with book one, feelings develop quickly with these two, and I liked the added element of Shayna, who was a hoot, as were the rest of the recurring characters, particularly, Shay. I'm awarding this novella four stars. ♥