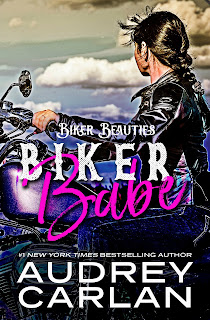 Audrey Carlan kicks off her Biker Beauties series with the first novella, Biker Babe, and it's the story of the Hero's Pride MC's lone biker princess falling for the club's new VP. Twenty-five-year-old Shay O'Donnell is loving her life. She's cherished by the motorcycle club her father is the president of, she's got her own clothing and accessories business called Biker Babe, and she's left her douchebag ex. However, her ex doesn't seem to get that she wants nothing to do with him, which is why he's been hounding her regularly to get her to give them a second chance. When thirty-year-old former Marine Taggart "T-Rex" Crawford steps in and lays down the law--and his fist to Shay's ex's nose--he becomes her hero, but she makes it clear nothing can happen between them, not when she's THE biker princess and he's the incoming vice president of the club, having transferred from the California chapter to the Oregon one. But Rex wants to stake his claim and make Shay his ol' lady, and he's prepared to go through any sort of obstacle or gauntlet to prove to her father and the entire club that Shay is no princess--she's Rex's queen.

This was a quick, fun read with an insta-love MC romance that was every bit as entertaining as I'd hoped it would be. Shay and Rex's first meeting was more "meet-heat" than it was "meet-cute" because the connection these two had was scorching from the get-go and simply got hotter every single time they were together. I enjoyed seeing how the added complication of her being THE biker princess of the Hero's Pride MC was going to play out because I highly doubted the brothers in the club would simply let it pass, especially with Shay's father being the Prez and her twin brother being a patched member. I loved the protectiveness these guys had, but my favorite supporting characters would have to be Cricket, who was an old-timer and one of the founding members of the club plus the resident leather worker, and Magdalene, aka Mags and Shay's mom and queen of all ol' ladies. as is often the case when it comes to MC romances, the men are very much alpha, but Shay was also a self-confident woman who knew her own strengths, which I really liked. Biker Babe gets 4.5 stars, and I can't wait to read Shane's story next! ♥