Review: Stick to the Script by Lane Hayes (Ace's Wild #13) 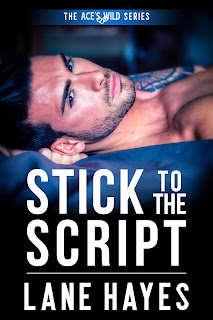 I admit it: I'm addicted to Lane Hayes's books. I've read and listened to all her currently published and released work, and I've yet to come across anything of hers that I didn't love. So naturally, when Hayes announced that she was going to be one of the fourteen authors who would take part in the multi-authored Ace's Wild series, I was curious to see what sort of story she would write and what her main characters' chosen kink would end up being.

When thirty-seven-year-old contractor and business co-owner Wyatt decided to play host to his parents' four guests while finishing the last of his remodeling of the B&B, he never expected to be stuck with the handsome man behind the lens that'll capture sexy shots for a book. They're very much attracted to each other, and Wyatt likes that Jamie trusts him to push his boundaries. Can they stick to the script or end up losing the plot and their hearts?

This story was a quick read, but it never felt lacking in terms of story or development. In the limited number of pages, we get to know both Jamie and Wyatt well enough to realize they're two good guys who unexpectedly find a connection that may start with lust but turns into more in the span of eight days. And sure, that may sound like a short amount of time, but other couples have fallen for each other in more immediate fashion, so this isn't "insta".

If memory serves me right, kinks that included spanking, a collar and leash, and bondage is something new in Lane Hayes's writing, but don't quote me on that because the possibility that I'm wrong may be high. Either way, I liked how Hayes interspersed that aspect of the story in equal measure with that of the friendship and love that flourished between her main characters. Once again, Hayes doesn't disappoint. Five stars go to Stick to the Script. ♥

Purchase Sticking to the Script on Amazon.