Review: Wait for Me by Tia Louise 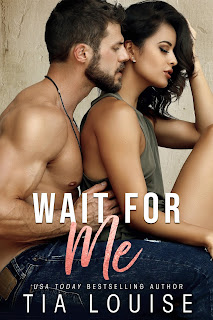 Wait for Me is the latest book from Tia Louise, and it's a companion novel of her previous recent release, Boss of Me, with both books working well enough as standalones. There was something about Taron Rhodes that piqued my interest when I first encountered him in Boss of Me, although to be fair, the same could be said for his friends, one of whom happens to be the one he's closest to, Sawyer LaGrange (yes, I finally know his last name!). Taron shares his story with Sawyer's sister, Noel. Seven years ago, Noel being eighteen and his best friend's younger and only sister may have given Taron pause but it didn't stop him from falling in love with her during that unforgettable summer spent in her hometown of Harristown, Tennessee. She promised she'd wait for him to return to her after his deployment, but one mission changed everything, and as far as Taron was concerned, there was no going back to what they had that summer. It takes all of those years apart for Taron to come to terms to everything that happened. He hopes to make amends and fight for Noel--only now, she isn't alone and may no longer be waiting...

This may sound strange, but I tend to have a couple of extra requirements when it comes to second-chance romances: honest-to-goodness remorse (which may or may not include genuine groveling) and an acceptable waiting period. Thankfully, this book had the first one in spades and while I may have preferred a wee bit of a longer waiting period before any reconciliation (i.e. sleeping together) happened, I feel that based on the circumstances that led to Taron and Noel's break-up, giving them some leeway was more than okay. Now, with as far as the other trope--if you check out the blurb for the book, it's the mention of Noel's "secret that has his blue-green eyes", and that's thinly veiled so I'm sure many already knew what it was about--well, admittedly I'm not a huge fan of it. However, just like with Taron's handling of things that had them go their separate ways, I kinda-sorta-maybe got why Noel decided not to say anything to him, although that doesn't excuse it because he still deserved to know, broken heart or not. It's that one thing that has me giving Wait for Me four stars instead of five. ♥

Purchase Wait for Me on Amazon | Apple Books | B&N | Kobo.