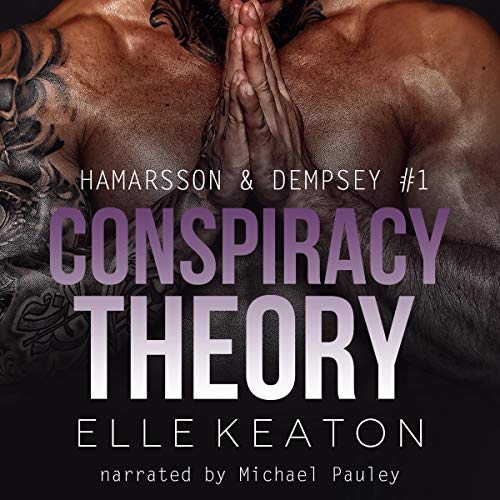 I've had the pleasure of reading almost all of Elle Keaton's books, save for one, with her Accidental Roots series being my favorite. She has a unique storytelling style that I've enjoyed time and again, so I was curious as to how that would translate in an audio format. Conspiracy Theory is the first book in the Hamarsson & Dempsey series and it's my first Keaton-penned audiobook as well. I read the book when it was released last year and liked it quite a bit, which is why I was quite excited to find out that while the cover of the audiobook states "Michael Dean" narrates this, it's actually Michael Pauley, who is one of my go-to narrators.

This was slow burn read that checked off all the boxes for me. Niall Hamarsson and Mat Dempsey were two men who knew each other growing up in their hometown of Piedras Island, Washington. Niall's childhood was far from idyllic, leaving emotional scars that he's never healed from. Mat has his own ties to Niall, and it was interesting to see how dealt with the older and far warier version of the boy from years ago. Niall's return to their hometown mysteriously coincides with a rash of crimes, and in order for Mat, who is now the sheriff, to solve them, he's going to need the help of the homicide detective who left the city disenchanted.

Admittedly, this story leans more towards the mystery and suspense elements compared to the romance aspect, but Elle Keaton's writing and Michael Pauley's narration meld so darn well together that even those who may wish for more romance will appreciate the combination that these two bring to the table. From the strong story that had me on the edge of my seat to the cast of characters led fantastically well by Niall and Mat, this first Hamarsson & Dempsey book more than ably sets the tone for the series going forward. Conspiracy Theory had me loving the story that I was listening to while leaving me curious what was yet to come. Five stars. ♥