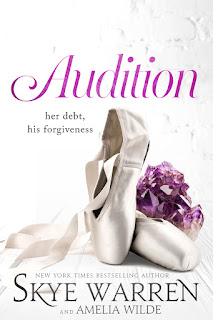 Audition is the much awaited spin-off of the North Security series, and this time around Skye Warren is sharing writing credit with Amelia Wilde, who is a new-to-me author. Unlike the other series starters penned by Warren in the Tanglewood book universe, this particular one doesn't end in a cliffhanger, or at least it didn't feel like it to me. I'm honestly not sure if the next book in the True North series will still feature Joshua North and Bethany Lewis or if there will be a new couple--although my hope is that readers will finally get to know the youngest North brother, Elijah, much better. But I digress... This newest release from Warren and Wilde delves into the relationship of Josh and Bethany and switches from the circumstances of how they met five years prior and where they're at right now.

Five years ago, Josh North knew he needed to stay away from Bethany Lewis. She was sixteen and twelve years his junior. She was the sister of someone he knew--someone he had a feeling was up to no good. Since then, their lives have gone in separate ways only to intersect yet again. The smart thing to do would be to keep his distance, but Josh is done standing on the sidelines, refusing to act on what he knows is a very mutual connection. The fact that someone has their sights set on Bethany has him in closer contact with her. He's going to keep her safe, even as she tries to push him away. He has no plans of conquering her, but maybe they can conquer each other's demons.

I've been so eager for this book ever since the North Security series ended, and it was worth the four-month wait! There was so much more to Josh and Bethany's story than I'd originally expected--a whole history that we weren't privy to until now. These two main characters haven't exactly had the best of childhoods, leaving the sort of lasting impression that they wish they could simply scrub away. The push and pull between them made for some great tension, and alongside the whole suspense and mystery angles, had me eagerly flipping pages. We also get the three North brothers together--Liam, Josh, and Elijah--as well as Samantha Brooks from the trilogy, and I love the fact that I'm such a fan of these characters and am eager for updates on how they are and where they're headed in their fictional lives, which is why I so need Elijah's book soon! As for Josh's and Bethany's, Audition gets five stars. ♥