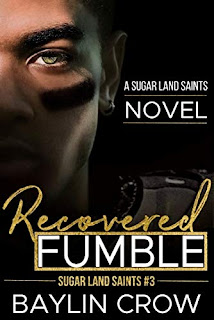 One of the best things about having all the currently published books in a series at your disposal is that when there overlapping events and slash or epilogues that leave you hanging, you have the next book readily available. I was curious to see how college senior and Sugar Land Saints wide receiver Nash Sterling and college freshman and younger brother to Shaw Wakefield, who also happens to be Nash's teammate and friend, Rendon Wakefield meet and form a connection. Well, Recovered Fumble is their story, and it's also the third and longest book in Baylin Crow's Sugar Land Saints series. So, how did it fare compared to the lackluster series starter and stellar follow-up?

From the moment Nash Sterling catches a glimpse of his teammate's younger brother, he's intrigued and soon after smitten by Rendon Wakefield. The last thing Nash wants is to cause discord with Shaw Wakefield, especially since Nash wants a championship season on his final year--one that will help him get drafted. But Rendon is a temptation that Nash finds difficult to resist, no matter how many times they seem to fumble with each other. The younger man isn't exactly sure what it is Nash sees in him, so he can't help but wonder if this is just a matter of satisfying his curiosity. However, Nash is ready to show Ren that this is more than a passing fancy--this is for keeps.

I quite liked this third book, which was more of a slow-burn romance that allowed me to not just get to know Nash and Ren better but also have their relationship flourish more, proving that it could go beyond lustful wants. I liked the respective back stories that the two main characters had, which further explained why Ren had the insecurities that he did and why Nash was determined to continue playing football well and get drafted. I enjoyed Nash and Ren's story and give Recovered Fumble 4.5 stars. With all three Sugar Land Saints books done, I've got my fingers crossed that Baylin Crow has a story in the works for Memphis and Tristan...and weirdly enough, also one for Jesse. ♥