Review: Bad for Me by Shanora Williams (Lords of Chaos #1) 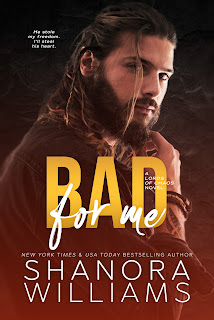 
All it took was for me to read the free prequel--many thanks to Wordsmith Publicity for that heads-up--to know I'd made the right decision to go with my gut to read and review Shanora Williams's newest release, Bad for Me. I'm REALLY hoping this is the first in a new series and I've gone ahead and made that assumption because of the cover which has the text that says "A Lords of Chaos Novel". I know, I know. There's the whole thing about people who assume, and I use that saying quite a bit, but let's just call this coming to a conclusion based on observation and a whole lot of wishful thinking on my part. We shall wait and see, but for now, let's all bask in the awesomeness of this series starter. Yep. Just putting it out there in the universe. I shall be waiting oh-not-so-patiently, dear author!

Now, if you have yet to read the prequel, it's still available via BookFunnel, but I think it's only there for a limited period of time (I got it in early November). If you aren't able to get it before it goes bye-bye, you can still fully enjoy and understand everything that transpires in the actual full-length novel. The prequel novella is told from the point of view of the male main character while the novel itself is told from the viewpoint of female main character. But yeah, if you an still get your grabby hands on the prequel, hop to it already; if not, no worries. Jump in and go read.

Bad for Me may seem like it's all about a bad-ass motorcycle club known as the Lords of Chaos, led by its president whose reputation for being ruthless and cruel has been earned; but if there's anyone who's the true bad-ass here, it's the woman who offers herself as payment for her brother's debt to the club. Twenty-seven-year-old Nova Almaraz is no shrinking violet nor is she a damsel in distress. When she becomes the club's captive, she refuses to bow down easily to whatever the club's president demands. The man whose road name of Wolf may only be twenty-eight, but his name is more than enough to strike fear in everyone. Everyone, that is, except a super Nova.

Step aside, heroines on my list of favorites this year because someone is about to take over the top spot. Nova is exactly what I called her--a super Nova. She was feminine and feisty, and when she experienced bouts of fear and doubt, she gathered inner strength and faced whatever came her way head on. She was definitely bad for Wolf because she skewed his perception of how he saw the world around him in ways he wasn't prepared for. He may have called her "Lamb" but she wasn't meek and I loved that about her. Now, I've read more than my fair share of MC romances, and one of my favorite things about how Shanora Williams wrote this was that she didn't sugarcoat nor over-romanticize what club life was like. It was violent and dangerous, but it reminds us that those who are part of it are still human. Bad for Me was actually so good for me and gets five stars. Now, I'm going to need more. ♥

Purchase Bad for Me on Amazon.