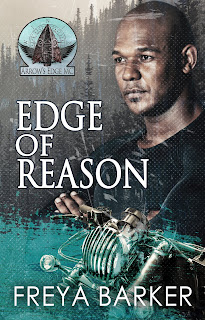 Can I just say that I've missed reading Freya Barker's writing? My last read from her was Keeping 6, which now reminds me that I need to read books two to four in the Rock Point series. I honestly couldn't tell you why it's been that long since I read something penned by her, but it's also a matter of having so many books and so little time to get through them all. However, with Barker now kicking off a brand-new series, Arrow's Edge MC, this was the perfect time for me to jump back in--since I wouldn't have to do any back reading prior to starting--and re-acquaint myself with her writing, and clearly, I very much remember why I fell in love with it in the first place four years ago!

Edge of Reason is the first book in the Arrow's Edge MC series, and I'm guessing that it's a spin-off considering the number of couples that are mentioned that appear to have had their own stories told in the past. This is the story of a child psychologist slash member of a motorcycle club and a single mother starting over after a tumultuous marriage and divorce. Titus Maximus Rae is a forty-five-year-old man of few words who telegraphs his desire to socialize as little as possible but would do anything and everything for the sister he loves and the little niece he adores. But when he finally decides to acknowledge his attraction to the fiercely independent thirty-eight-year-old personal assistant to his sister, he sees a future with her, but can Trunk protect Jaimie Lynn Belcamp from her past?

From the romance to the suspense and everything in between, Freya Barker has proven she knows how to weave the sort of story that grabs your attention from the first few pages and dares you to look away till the very end. I loved the flow of Titus (Yup, I'm calling him Titus and not Trunk because his real name just has a sexier vibe to it.) and Jaimie's story and how everything intersected, making it near impossible for them to be anything but together through everything that was thrown their way. They had such a strong connection, balancing each other out in ways that they may not have realized they needed. There's a bite of humor amidst all the angst and suspense, and even though I figured out early on who the minion of the villain was, I was still at the edge of my seat awaiting how everything would be revealed. Edge of Reason easily gets five stars, leaving me eager for more from Barker's series. ♥

Purchase Edge of Reason on Amazon.