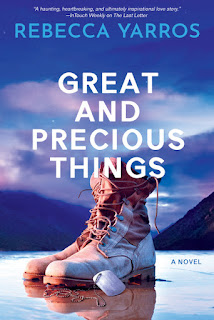 This was where I wanted to live, to exist—in these moments where nothing outside these walls could touch what we were building inside them. Where we always should have been.

Requesting for galleys is a hit-or-miss process; you either get approved or you don't, and I'm not exactly a big-name blogger or someone with a following consisting of thousands of readers. So, when I put in a request on Edelweiss+ to read and review Rebecca Yarros's Great and Precious Things, I didn't hold out a whole lot of hope--but there was still that inkling of it, with fingers and toes crossed. And miracle of miracles, I received an eMail informing me that my request had been approved! Gah! I may have screamed and danced in joy and celebration because duh, Yarros happens to be one of my all-time favorite go-to authors. There is nothing this author has written and published that I haven't read. Call it being a fangirl--I prefer the term "flygirl", thank you very much--but at this point in my life, I've read thousands of books, and I recognize Yarros's gift for writing the sort of stories that stay with you even after you've turned the last page. Her latest novel is as heartrending as I expected it to be, and it is just as inspiring.

Great and Precious Things is a standalone and the story of the love and loyalty we have for family and that one person who lays claim to our heart and not believing that we deserve it. When Camden Daniels left his hometown of Alba, Colorado, and headed for war, he swore the only way he would be back would be in a casket, ready to be buried beside his mother. Except Cam did return six years ago, only the burial was for his younger brother, Sullivan--Sully who had followed him into the military, and whose death is a burden Cam bears, the blame solely placed on him by his father and the rest of the townsfolk of Alba. Twenty-eight-year-old Cam's latest return is spurred on by a phone call from his father, and while the welcome is far from warm, Cam intends to stay. Even if it means living in the same town as twenty-five-year-old Willow Bradley. Even if it means keeping her in the dark, never discussing his unforgivable sins. Even if it means never having her, no matter how much she tells him it's only ever been him.

There were things about this book that made me think of John Steinbeck's East of Eden--as well as the film adaptation starring James Dean--as well as Legends of the Fall, which had a powerhouse cast led by Brad Pitt and Anthony Hopkins and directed by Edward Zwick. Elements regarding family and rivalry, love and loyalty, brotherhood and betrayal were all shared by Steinbeck's classic novel, Zwick's haunting movie, and Rebecca Yarros's heartrending story, yet each stands on its own remarkable merits. Yarros's writing is the kind that takes hold of my heart and refuses to let go even after I'm done reading. Cam and Willow's story had aspects that resonated with me, and I loved the story line regarding their romance as much as I did that when it came to their families. If you've never read anything by Yarros before, I'm highly encouraging you to rectify that with Great and Precious Things (and then work your way through her brilliant back list). I promise, you will not regret it. An infinity of stars. ♥