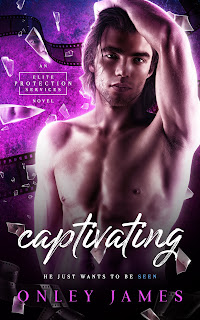 “So, you're a sociopath. All relationships have issues. It could be worse. You could be a Republican.”

“I am a Republican,” Shep said, keeping his face neutral.


When I discovered Onley James's writing by way of her debut release and Elite Protection Services series starter, Intoxicating, I knew I was going to have to keep an eye on any and all future books from her. If anyone had pegged her as a one-hit wonder need not look any further than the second book in the series. The benchmark book one set has been met and surpassed rather handily by this original story that's a darkly and wittily decadent in its amalgamation of romance, sex, mystery and suspense. James has easily landed on my list of favorite author finds this year, and while she's only published two books so far (although she has double that under her young adult pen name of Martina McAtee), I'm already this obsessed with this series and her writing has me excited for what else she has to show readers in the years to come. I'm expecting a whole lot, but experience tells me it will all be good.

Captivating is the story of twenty-two-year-old Oscar-winning actor Elijah Dunne and forty-two-year-old former Marine turned interrogator turned bodyguard Janey Shepherd. When Shep shows up for his first official day with Elite Protection Services, he's immediately tasked with shadowing Elijah after the younger man is publicly outed by a gossip site and is soon after assaulted on the red carpet by a homophobe. As disconcerted as Elijah may be with the presence of this stoic man as a bodyguard, there's something about Shep that makes him want to get closer, and the same goes for Shep when it comes to the boy that more than piques his curiosity. As drawn as they may be to each other, though, will they still be as equally captivated once their respective pasts and histories are laid bare?

Who'd have thought there was such a thing as a high-functioning sociopath? THIS GIRL! My love for shows and books about criminals who are either psychopaths or sociopaths may not make me an expert, but the idea of a sociopath who functions as if they're a normal member of society and not immediately be seen as anything other than that wasn't foreign to me. What did knock me for a loop was having one of the main characters in a romantic suspense novel be exactly that and then partnered with an award-winning actor. For creativity alone, Onley James takes the cake, but her writing is so damn impeccable and addictive that I was a wholly captivated--pun intended!--by Elijah and Shep's story. I loved the combustible connection that these two shared, but I also appreciated that it took some give and take and a better understanding of each other to make it all work. Yes, this was dark, and yes, this was different, but it's also really damn good and more than worth the read. Captivating garners five-plus stars. ♥