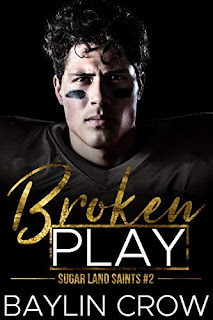 With me reading all three books in Baylin Crow's Sugar Land Saints one after the other in a single go, it almost felt as if I had a better appreciation for the guys in the story, and I'm not talking about just the three couples that have books so far. Shaw Wakefield and Bishop Shepherd were introduced in the series starter, Quarterback Sneak, and it was kinda-sorta-maybe obvious that something was going on between the two of them. In Broken Play, Shaw and Bishop remain the wide receiver and safety, respectively, and are now seniors. While Shaw's family and those closest to him back home know that he's bisexual, he's kept his sexuality close to the vest while in Sugar Land University. On the other hand, Bishop is very much in the closet, his being gay is something he hasn't shared with anyone in college except for Shepherd. They're teammates who become friends that end up having an arrangement that works for them--no romantic entanglements, purely sex, and Shaw was Bishop's and vice-versa until they mutually ended things. But with their feelings deepening and Bishop's father becoming demanding, will Bishop choose to follow in his father's footsteps and carry on the legacy his late mother started or will he choose to be honest with himself and with Shaw and live openly with the man who is not only his friend but his forever?

Okay, I admit it: This book was my favorite among the three currently available Sugar Land Saints stories. I loved the back and forth and give and take going on between the main characters, and the fact that Shaw and Bishop were opposites, not just in terms of personality but also when it came to their backgrounds and upbringings, yet had such a strong connection made them even more intriguing. The idea that Bishop is torn between the path he was always expected to embark upon and the one that he had never considered traveling prior to having Shaw become such an integral part of his life may not be anything new, but the reason he hesitates isn't the usual thing, i.e. money, so I appreciated that the author came up with something different. Shaw is easily likable, and by the end of the book, I totally adored the guy; but when it came to Bishop, his being more standoffish and wary of people yet had a whole lot more to him than that resonated with me because, well, that's me in a nutshell. I loved getting to know him better, and the more that he and Shaw became invested in their relationship, the more I did, too. The direction and pacing of the story was one that I also give props, too, and that bonus chapter at the end answered the lone question that boggled my mind since book one, so yay! Broken Play snags five out of five stars. ♥