Review: Every Little Piece of Me by Lexi Ryan (Orchid Valley #1) 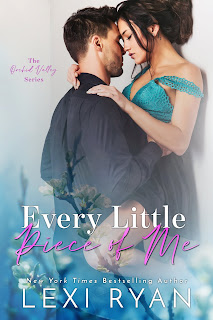 Oh my. I'm kind of at a loss as to how to put together this review, and not in a good way. I've loved reading Lexi Ryan's previous novels and series, so naturally, I was excited to hear that she had a new series in the works. The free prequel, Every Little Promise, was, indeed, promising. A quick FYI: You do not need to read the aforementioned prequel because it's included in the first full-length novel, serving as the first several chapters. Since I already read the novella, I skipped said chapters found in Every Little Piece of Me, the series starter in Ryan's brand-new Orchid Valley series.

A quick overview: Marston Rowe fell in love with Brinley Knox, but he was the outsider who didn't have the right lineage to be with someone like her and the tragedy strikes and she rejects him. Fast forward a decade later. Their paths cross in Las Vegas and for one night, they rekindle their passion for each other. Six months later, Marston learns that Brinley is to be married. The problem is, she's already someone else's wife--and that someone else just happens to be him. She may have pushed him away ten years ago, but this time around, he refuses to give up without fighting for them.

I love a good second-chance romance, and on paper, this book should have worked out better than it did for me. I didn't have the connection that I wanted with either of the main characters. Brinley was a walking contradiction--someone who wanted her independence yet allowed her parents and her fiancé to influence her life choices. Her saving graces were her ten-year-old daughter, Cami, and her close-knit circle of friends. as for Marston, he was a pretty good guy, but a wee bit bull-headed. I really wanted to like this more than I did; alas, it faltered more than it connected, so it pains me to give Every Little Piece of Me "only" 3.5 stars. I am, however, still looking forward to reading the next book. 🖤

Purchase Every Little Piece of Me on Amazon | Apple Books | B&N | Kobo.