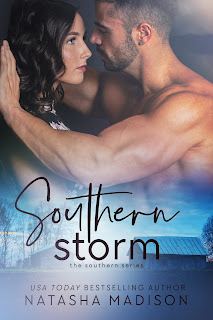 Southern Storm is the third novel in Natasha Madison's Southern series, and I'll be honest--this was the one I was worried about reading, mainly because of the female main character and her actions prior to the events in books one and two, Southern Chance and Southern Comfort, respectively. Savannah Harrison knew all too well what her hometown thought of her. She was the reason why the couple that everyone expected to live happily-ever-after were torn apart and stayed that way for eight years. They may have reconciled, but Savannah isn't foolish enough to believe that she's been forgiven. The secret she's kept has only been shared with a very select few, but now, the man she considers her very best friend--the same one she's secretly loved for years--has stumbled upon proof that Savannah can't explain away. The devastating truth about who the biological father of her son really is will change her relationship with Beau Huntington forever. There's a storm brewing, one that threatens to destroy everything that Savannah has worked hard for, but if anyone can shield her from it all, it would be none other than her Beau.

First things first: While each of the books in the Southern series is about a different couple, the main cast of characters recurs from book to book, and there is one particular story arc that carries over throughout. So, my recommendation is that you read the books in order.Now, as far as this third book is concerned, I'm glad that the secret is finally out, at least with as far as those who were closest to Savannah mattered. I liked how Savannah and Beau finally went from being friends to more, although these two seriously need to learn how to communicate better because the whole secret keeping thing already cost Jacob and Kallie eight years of heartbreak (plus there's the cliffhanger of sorts here). The main reason I didn't give this a higher rating had to do with how Savannah AND Jacob seemed to think it was okay to make everyone else feel guilty about their less than pleased reactions rather than own up immediately to what they did. Sigh. Thankfully, though, I did warm up to Savannah in the latter half of this book, which is a good thing since I wasn't much of a fan of hers in the first two. Four stars for Southern Storm. ♥