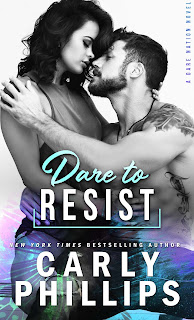 Carly Phillips returns to the Dare book universe that many of her fans and readers adore--Dare to Love was my introduction to her writing and I've been hooked to all things Dare ever since--with the first in a brand-new spin-off series! Dare Nation features the cousins of the Dare siblings and cousins we met in the original Dare to Love series  (featuring the two sets of Robert Dare's offspring) and the first spin-off, Dare NY (featuring the children of Samuel Dare). These Dares actually carry the name Prescott, but their biological father is none other than Paul Dare, brother to Robert and Samuel. All of that being said, this new series can be read separately from the first two aforementioned ones, but if you like knowing all the ins and outs of this book universe, go check out all the books!

Dare to Resist is the story of Austin Prescott, the eldest among the Prescott siblings. He's a former professional football player turned sports agent and co-owner of the Dare Nation sports agency, opening it alongside Paul Dare, the man he grew up knowing he was his mother's best friend and the Prescott kids' honorary uncle but turned out to be their biological father. With his focus being on their growing business, Austin prefers keeping his personal life casual, without much desire for anything more. However, if there was anyone who's made him consider otherwise, it would be Quinnlyn Stone. The problem? Quinn is his executive assistant, and he cannot afford to cross that line with her. When the unexpected appearance of a baby on his doorstep leads to Quinn staying with him to help care for a child who could very well be his daughter, Austin isn't sure if he's willing to let either one of them go.

This was a really enjoyable kick-off to the new Dare Nation series. Without giving too much away, the conflict in the romance between Austin and Quinn went beyond the obvious, i.e. their professional relationship, making for a more intriguing read given the new circumstances they found themselves in. The chemistry between Austin and Quinn was palpable, but I liked that they tried for as long as they did to keep things proprietary. Another thing I liked was seeing a different side to each main character once Jenny, aka the baby, came into the picture. This isn't necessarily a lengthy read, but it also never felt rushed or a case of insta-love, which I appreciated. Carly Phillips has written a strong series starter which I hope bodes well going forward. 4.5 stars for Dare to Resist. 🖤