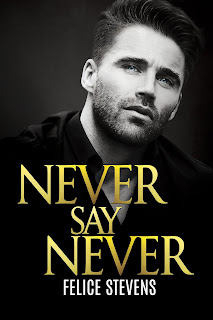 Never Say Never is the third and final novel in Felice Stevens's Lost in New York series, and it's an enemies-to-lovers romance with a whole lot of snark, steam, and sweetness. Oh, and let's not forget the angst because Stevens has become one of my favorite go-to authors when it comes to angsty goodness. If you've read the other books in the series, then you'll remember Francisco Martinelli, aka Frisco, who happens to be the best friend of Presley Dawson, who found his happily-ever-after in Fool for Love. While he loves that his Press is engaged and full of love and joy, forty-year-old Frisco isn't in the market for the same thing, but that's what happens when you don't believe in love. He's good with casual, and when he meets thirty-five-year-old Salvatore Rossi, that's all he's looking for even if the chemistry between them is off the charts. So why is it that he can't stop thinking about Torre or reaching out to him even though Frisco's ghosted the poor guy more than once? Frisco is used to simple one-offs, and everything to do with Torre and the guy's brother and secrets galore between them? Well, it's all complicated.

This was such a great way to end this series! I loved the undeniable connection Frisco and Torre shared, and how they were very things standing in the way of what could be either THEIR love story or a cautionary tale about hook-ups and secrets. Between the two of them, I definitely could relate to Frisco and how he never felt like he was able to give all of himself to someone for fear of it being nothing more than a disaster waiting to happen. These two had their share of differences, and I think it made them more interesting because I wanted to see how they would bridge those gaps and work through their assumptions and issues. We get appearances from the two previous couples in the story, Presley Dawson and Nate Sherman (Fool for Love) and Ezra Green and Monroe Friedman (The Promise), as well, and it was nice checking in with them and where they all were with their happily-ever-afters. Never Say Never was the five-starred ending that I hoped for. Make sure to get the Lost in New York Bonus Scenes from Felice Stevens as she wraps up one particular loose end that had me grinning with full-on merry satisfaction. ♥