Review: The Promise by Felice Stevens (Lost in New York #2) 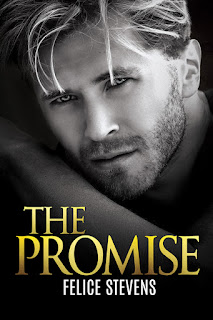 The Promise is the second novel in Felice Stevens's Lost in New York series, and it's a second-chance romance twenty-three years in the making. When they were teenagers, best friends Ezra Green and Monroe Friedman fell in love. When Ezra's parents decide to move from New York to California, he promised to come back after he graduated from college, and Monroe promised to wait for him, both seventeen-year-olds swearing they'll stay in touch in the meantime. But promises can be difficult to keep, and as weeks become months and months turn into years, Ezra and Roe never hear from each other again...until Ezra returns to New York to be closer to his best friend (Ross Miller from Running from My Heart, book three of the Rock Bottom series). He reaches out to Roe, but the reception he receives if far from welcoming. Even after all these years, the hurt and betrayal remain, but there are so many unanswered questions--questions that will have to wait when Roe's beloved grandmother suffers a stroke. With her memory jumbled up, she thinks Roe and Ezra are still seventeen and together. A fake relationship could bring joy to an old woman, but could it also be an opportunity for these two men to make a new and real promise?

The angst is strong in this one, and heck, I am so not complaining. Angst addict in the house, people! But if any author knows how to do angst, it's Felice Stevens, and she does it well. It's clear from the get-go that there was more at play than two teenagers on opposite coasts who stopped communicating, and my heart went out to them. I'm not going to get into what actually happened, but I was right on the nose as far as my guesswork went. It would be easy to say that they were young anyway, and that if they were meant to be together, fate would intervene. But there was a great deal of heartbreak, followed be insecurities and doubts that crept in and lingered even years later. There is A LOT of back and forth with Ezra and Monroe, at times feeling like they take one step forward and one leap backward. Sometimes, patience helps, but then you may also need a push (and I totally guessed that as well). It was fun seeing Ross and Arden (Running from My Heart, book three of the Rock Bottom series) again, plus we also get a glimpse of Nate and Presley (Fool for Love, book one of the Lost in New York series). Stevens has written a good, four-starred second addition to this series in The Promise, and I look forward to the third one soon! ♥

The Promise (book two) - four stars - My Review (posted above)

Purchase The Promise on Amazon.