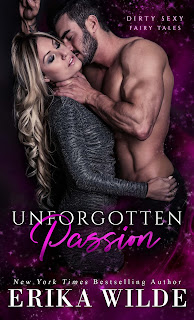 Erika Wilde releases the fourth book in her Dirty Sexy Fairy Tales series, and it’s my favorite of the lot. Unforgotten Passion is a modern take on the Rapunzel fairy tale with a dirty and sexy feel. Twenty-four-year-old Raevynn Walsh is a pop star with fame, fortune, and fans, but her life isn’t really her own. Kept on a very short leash by her momager, Rae is often surrounded more by her bodyguards and staff than any sort of real friends. When she hears her name called out as she’s leaving the Wilder Way Fairy Tale Ball, she’s shocked to realize that it’s none other than Collin Donovan—the boy she once loved at seventeen and the same one who broke her heart right as he was heading off to college. Eight years later, the twenty-five-year-old MadX Tech security analyst could be her path to freedom, even if it’s for a short period of time. In those handful of days, Collin and Rae reconnect, knowing there’s never been anyone else who’s mattered since they broke up, but will their reunion end when Rae returns to the spotlight?

For someone who’s led such a regimented life under the control of her mother slash manager, I applauded the impulsiveness of Rae within minutes of being around Collin again. There aren’t really any sort of surprises or twists in this story, but Wilde’s treatment of the Rapunzel fairy tale and giving it both the modern and sexier spins were done well. Rae and Collin were the sort of main characters that you couldn’t help but like. She may have been under her mother’s thumb most of her life, but you could see bits of “rebelliousness”—I prefer calling it Rae striving for moments of independence—even when she was younger, i.e. her relationship with Collin. There isn’t much in terms of drama or angst, even when it came to the discussion of why the broke up when she was seventeen and he was eighteen. Overall, I liked the story, and I liked how everything was resolved. I’m not sure if there are books to come in the series, but whether or not Unforgotten Passion is the last book, it was an entertaining 4.5-starred read I enjoyed. ♥