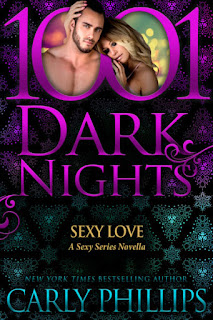 Sexy Love is a novella in the Sexy series from Carly Phillips, and it's a quick read that isn't necessarily insta-love but everything that happens between the main characters is fairly fast-paced. For fans and readers of this series, this is the story of Amber Davis, then-girlfriend of the late Levi Bennett and mother of his son, L.J. It's been more than a decade since Amber left school in order to mourn Levi and have L.J. and now, she's ready to earn her degree, something that she's been wanting to do for years. But could her sizzling attraction to Professor Shane Warden put a halt to that? Shane himself is close to finally becoming tenured, so he needs to keep his eye on the prize. Falling for a student would certainly be more than a stumbling block--it could end his career at the university. He's already been accused of having an affair with a student before. The only difference now is that this time around, it's true.

Like the other books before it, this new novella can pretty much be read as a standalone, but it does have loose ties to the three more full-length books before it. It is, however, the only one that doesn't have Ten29--the club Jason Dare, Tanner Grayson, and Landon Bennett all own, Landon being Levi's twin brother and uncle to Amber's son, L.J., although Jason and Tanner are honorary uncles--as a prominent backdrop. Things progress quickly between Amber and Shane, which isn't really that much of a surprise, given how short the book is and I don't have an aversion to insta-love reads or those where the couple go from strangers to developing feelings quickly. After losing Levi, Amber is just one of those characters that deserves to have her own happy ending, and it fittingly comes in the form of Shane, who truly is a sweetheart. Sexy Love was a sweet and sexy, four-star end to this series. ♥