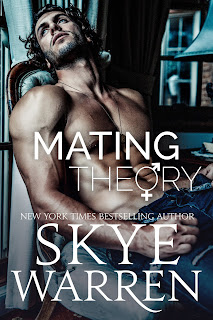 I've been waiting for Sutton Mayfair's happily-ever-after ever since the end of the The Evolution of Man in September of 2018, and Skye Warren made the year and a half-long wait so worth it. Mating Theory is a companion novel to the Trust Fund duology, and while you could very well read this independently of The Survival of the Richest and The Evolution of Man, I suggest you check those books out of you're interested in the back story involving Sutton with his kinda-sorta-maybe best friend and former business partner Christopher Bardot and the woman they were both in love with, Harper St. Claire. Of course you could still choose to simply jump in and read this one, and you won't feel too lost anyway.

Thirty-two-year-old Sutton Mayfair is heartbroken twice over, not having the love he had for his best friend returned and having the woman they loved choose his best friend over him. An unexpected meeting with a young woman named Ashleigh provides a temporary distraction that leaves a lasting impression. When he sees her again, it's on the heels of yet another reminder of his heartbreak. This time, Sutton and Ashleigh come to an agreement, but while he intends to get exactly what he pays for, he can't help but want far more than he anticipated from Ashleigh Johnson.

Let me get this part out of the way so that I can focus my adoration on all things Sutton and Ashleigh: my opinion of Christopher and Harper went down a notch or two here. I feel that it was quite insensitive of Christopher to ask of Sutton what he did and for Harper to even suggest what she did. No spoilers, so you'll have to read the book to see what I'm talking about, but yeah. Tsk, tsk.

Now, moving on, I've been itching for the continuation of Sutton and Ashleigh 's story ever since that bonus story from before (which you won't need to look for since it makes up the prologue in this book). This was an age-gap romance--Sutton is thirty-two and Ashleigh is seventeen. There are reasons for her being in the position she was in when she and Sutton get together, and my heart broke for her. Sutton's back story isn't all about sunshine and snuggles either. I loved that Skye Warren took these characters in a direction I wasn't expecting. If I had to nitpick, it would be that I wanted more--more of Sutton and Ashleigh as individuals and as a couple, more of Ky and his story, just...more. Basically, I couldn't get enough, which is a good thing. Five stars for Mating Theory. ❤