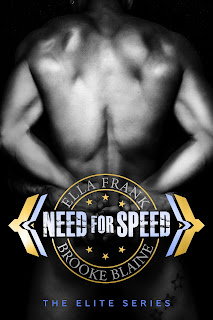 Panther smiled. “You did.”


I swear, something magical happens when Ella Frank and Brooke Blaine get together to write a book. As individual authors, these two have penned addictive standalones and series that many readers have devoured, but there's that extra bit of decadence when they activate those wonder besties writing powers of theirs. Their new Elite series is a different flavor story-wise, given that while the PresLocke series was about an actor and a model and the Fallen Angel series was about a rock band, they were both about celebrities. Here, we've got two of the best Navy fighter pilots gunning for the top spot in NAFTA, a Top Gun-inspired program to find each class's cream of the crop.

At this point in my review, I may inadvertently mention something to could turn out to be spoiler-like if you have yet to read the first book, Danger Zone. Consider yourselves forewarned! Moving on... After the harrowing incident at the end of book one, Grant Hughes (call sign: Panther) is trying to reset and get his mind back in the game. But he's distracted, not just by what happened to him, but by one cocky and gorgeous man--Mateo Morgan (call sign: Solo). Their was supposed to be nothing more than a temporary thing--just two men scratching an itch in the privacy of wherever the lust got the better of them--but feelings that went beyond the physical have crept in. Panther knows Solo cares about him, but is there a possibility that what they share means much more to him as well, and if so, what are they to do about when at the end of their time in NAFTA, they may be stationed far apart?

After that doozy of a cliffhanger in book one, I'd been not-quite-patiently waiting to get my hands on book two, and goodness, but how I wanted to have an after-book snuggle with my tablet after I was done reading. Grant and Mateo slash Panther and Solo are at that point where it's clear that what they have is simply MORE. If it looks like love and feels like love, it's most probably exactly that, boys! Le sigh. Now, now, before you think you already know what happens in this second book, tap on those brakes and hold up a minute. There's quite a bit that unfolds here that changes the game for these two guys, and that's inside and outside of the cockpit. The ending isn't an evil cliffhanger, but it does leave you eagerly wanting to know what may await them! Five-plus stars for Need for Speed. ♥

Purchase Need for Speed on Amazon.