Review: The Pathfinders by Geoffrey Knight 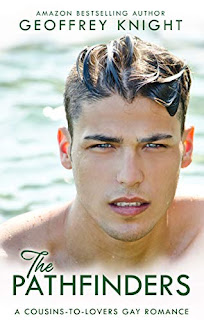 The Pathfinders is my sixth read from Geoffrey Knight, but it's the first one that's a cousins-to-lovers romance. We meet Hux and Jack--first cousins and best friends. Jack is recently divorced and is having some difficulty adjusting to life as a single guy. Hux badgers Jack to join him at Pathfinders Lake and help restore an old cabin that belonged to their uncle. Hux has always had feelings for his cousin/bestie, and while Jack was married, Hux knew that he had no choice but to keep said feelings under wraps. Now that Jack is single again, will Hux be able to resist the urge to confess how he feels, and if he does, will it end up costing him Jack or will he gain a great deal more instead?

This was a book that held a great deal of promise. I'm not one to shy away from story lines that are considered controversial or different. Both Hux and Jack were well-developed main characters, although more the former than the latter, and there is a certain amount of emotional investment in seeing how their relationship with flourish. For the most part, this was a good read, but there is a point where things become muddled, leaving me wanting. Hux also came off being the braver of the two, ready to risk all for the man he loved, while Jack allowed his doubts to get the better of him. All things considered, Geoffrey Knight's writing and Hux were enough for me to give The Pathfinders 3.5 stars. ♥

Purchase The Pathfinders on Amazon.