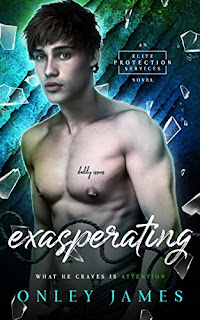 Exasperating is the third novel in the Elite Protection Services romantic suspense series from Onley James. This time around, we have aspiring actor Robby Shaw and security specialist Calder Seton. Born Obidiah Shaw, Robby legally changes his name to Robby Shaw and is forced to break ties with his family when his zealot of a father--and leader of the Magnus Dei cult--decides a gay son must be banished from their fold. At twenty-one, he finds himself in a downward spiral, no thanks to a very public breakup with his fake boyfriend. That, however, is nothing compared to when a stranger invades his home and Robby is forced to defend himself. In desperate need of help, Robby reaches out to Calder. When Robby goes on to procure the services of Elite Protection, however, it has Calder becoming his protection detail, which means if Calder wants to remain employed, he needs to keep things purely professional with his new client. Unfortunately for Calder, virginal Robby has no qualms tempting the manwhore, but with all their baggage and someone threatening Robby's life, can there even be a future for them?

I've enjoyed reading Onley James's Elite Protection Services, with the first two novels leaving quite an impression on me. After everything that went down in book two, I needed to see Robby get his own happily-ever-after as well, and he certainly does here. Both Robby and Calder have rather dark back stories, and while they may have seemed to have very little common, it's those pasts of theirs that turn out to be the common thread that binds them, aside from their mutual attraction to each other, of course. I confess, though, that this wasn't my favorite read in the series. Don't get me wrong; I still liked the story and the characters were definitely interesting and the connection was there. I also appreciated that while Robby had been surviving since he left the cult, he wasn't necessarily thriving, and he was able to finally do that when he was surrounded with those who become his new family--his friends plus Calder. The epilogue took me by surprise, but in a way, I guess it was fitting because it brought everything full circle for Robby. While this wasn't at par with books one and two, Exasperating still gets four stars. ♥