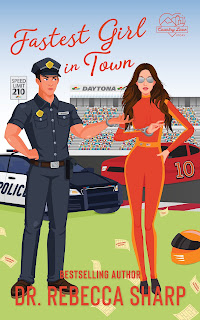 This series! Goodness but how this has become one of my reading highlights so far this year. Rebecca Sharp has NOT disappointed, each book has lived up to my expectations. While my first few reads from Sharp were of a heavier fare, I'm loving her more light-hearted stuff. There may be a hint of angst, and in this new one there's the added element of mystery and suspense, but the romance and the humor are what stay constant and consistent, plus every single story is a true standalone.

Fastest Girl in Town is the third and latest novel in the Country Love series from Rebecca Sharp. We've got ourselves a champion race car driver with a penchant of putting the pedal to the metal both on and off the race track. But while Daniela Lambert barely got ticketed for speeding thanks to some leeway from the cops, Sheriff Brandon Stark of the Daytona Police isn't going to let her slide when he's the one who catches her. They clash immediately, but when Dani's life is threatened, it's Brandon becomes her unexpected ally.

This was such a fun read, one that kept me entertained for the couple or so hours it took me to read it in one sitting. I love the spark and the snark between Dani and Brandon. The mystery as to who wanted Dani dead was one that I'd guessed right from the moment the villain or villains (not saying which!) appeared, but my interest never waned, and I wanted to see how everything would be revealed. I was actually worried this would be the last book in the series, but it looks like there's at least one more to come! Fastest Girl in Town is the perfect weekend romance read and it gets five stars. 🖤