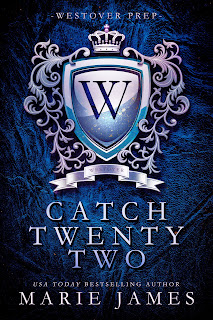 Catch Twenty-Two is one of those books that's difficult for me to review. It had it's high points, but there were also quite a few things about it that gave me pause. This is the second book in the Westover Prep series form Marie James, and if you read the first book, One-Eighty, then you know it's about Frances Young, aka Frankie, Piper Schofield's best friend. Readers get glimpses of Frankie spending her summer on her grandmother's ranch in Utah during her conversations with Piper, and everything comes to a head at the end of the series starter. You don't necessarily need to read book one to enjoy and understand book two, but I highly recommend it based on two things: it's a truly fantastic read--so not your typical "alphahole" bully romance--and there are recurring characters.

Seventeen-year-old Frances Young thought her summer in Utah would be an uneventful one, but when she meets eighteen-year-old Ezekiel Benson, it turns out to be the most life-changing summer ever. Zeke doesn't hesitate to show Frankie just how much he hates her, and poor Frankie can't fathom what she may have done to inspire such ire. He makes it his mission to try and break her, but he also can't seem to stop himself from being drawn to her. When tragedy strikes, Zeke takes comfort in the presence of the girl he's supposed to hate but has already begun falling for, but in mere hours, everything shifts between them. The last thing Frankie expected was to see the boy who broke her heart in Westover, Colorado, but he's not only in her town--he's also in her home and in her school.

Let me start this part of my review by mentioning the things I did like about this book. Marie James's writing was, once again, impressive, and Frankie was a cracker of a heroine, one who was vulnerable yet knew when to stand up for herself. I also liked certain supporting characters, namely Piper and Dalton, as well as Frankie's Nan and Rowdy, the new ranch foreman. I don't really have much to say about Frankie's parents other than they were absentee parents who only seemed to take notice when there was something amiss, and I'm sorry but that makes them lousy parents. There were some interesting things going on with one particular schoolmate of theirs, and it is hinted at who they could very well be paired up with in the still untitled third book of the NA Westover Prep series.

Zeke managed to win me over by the last quarter of this book, but it's his actions during the first three quarters that have me feeling iffy. Yes, he had his "reasons" for not wanting to give Frankie a warm welcome, but he continued to bully her and treat her with disrespect, going so far as toying with her emotions. He did the whole back and forth thing, and it got to the point where it was just too much. Even when they were both in Westover Prep, the choices he made had me wanting to smack him. Hard. Many times. Sure, he apologized and made amends, but it took him forfuckingever. Sigh. There was also the bullying of a schoolmate near the end of the book where Zeke and Frankie, alongside Dalton and Piper, merely stood there and only one person stepped in--none of them being the aforementioned. As much as I loved One-Eighty, Catch Twenty-Two just wasn't at par. Three stars. ♥

Read my reviews for the Westover Prep series: