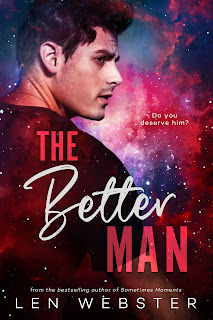 After the success of her Sometimes Moments, Thirty-Eight, and The Science of Unrequited series, Len Webster is back with a new standalone--which I suspect is the first in a new series of standalones featuring one particular family. The Better Man features Savannah Peters, who was a notable supporting character in Webster's The Science of Unrequited having been the best friend of Alexandra Parker. However, you don't necessarily need to read that in order to enjoy this one.

Having a front row seat to the epic love story between Alex and Evan Gilmore, Savannah knows that happily-ever-afters do exist. However, the one guy she'd fallen for was bad for her. He knew and she knew it, going as far as him warning her that he would never love her. It's been years since she closed her door on anything with him, so why has he now come knocking, asking for another chance to get things right? And why now, just as she's in the presence of a man who treats her the way she's always deserved? Which is the better man?


Len Webster requested that the identities of the two men in Savannah's life a secret prior to the release of the book, but since we're now two days past that, I think it's safe for me to mention them here. So, consider this your heads-up! If you've yet to read the book and you're familiar with Webster's past books, then you may want to skip this part. If you're okay with knowing it are new to her writing and won't know who they are anyway, then here you go: William Lawrence and Walter Divodić. Nice, especially in terms of comparison.

Okay, so this was a good read. It's told in multiple third-person perspectives, particularly the three main characters, and it was presented well enough, although there were moments where I wish pronouns had been used instead of the repetitive use of the name of whoever's POV we were getting. It was pretty clear, at least from my end, who the titular better man was. The other one wasn't a bad guy and I certainly wouldn't mind reading his HEA in the future. I'm just saying that one deserved to be with Savannah more and vice-versa. Overall, The Better Man was a lovely, four-starred read. 🖤
Date Read: 28 March 2020