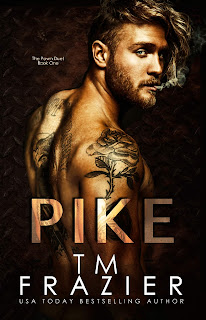 We've got ourselves a King series spin-off duet from T.M. Frazier! Pike is the first book in her Pawn duology and fans and readers of the original series have been chomping at the bit ever since this was announced. You don't necessarily need to read all of the books from the King series in order to appreciate this new book--I've only read a few of the latter ones--but I do think that having a more than fair idea of the characters from the original collection of novels may allow you to have a better understanding of the ties that bind everyone. However, let me reiterate that you can still go into this and fully get what's happening to, around, and between the two new main characters.

We're often cautioned to not go looking for trouble, but it seems that trouble finds it way towards Michael Lovejoy. When she first encounters a man named Pike, it's enough to make an impression on both of them, but she's a distraction that he doesn't need in his life. He likes it just the way it is. However, the connection Mickey has to the man Pike is on the hunt for have him making a drastic decision--she's going to become his pawn, and he has no intention of not winning this game with his enemy. She's supposed to be nothing more than a means to an end, yet the pull Pike has towards her can only be denied for so long. Can Pike still allow Mickey to be his sacrificial lamb?

What we have in this first in a duet is a fast-paced romantic suspense read with a darker tone to it, but then I've come to expect nothing less from T.M. Frazier. Pike and Mickey are intriguing as individuals, begging to have those layers peeled back until we get to the nitty-gritty part of who they really are and what's made them into the people we meet. Their connection is deliciously dark and decadent, and I liked seeing how they developed as characters from the moment their paths cross. Fair warning, though: this does end in a cliffhanger, so if you're the type who hates them, you may want to hold off till book two, Pawn, in a little over a month's time. I'm handing Pike 4.5 stars. ♥